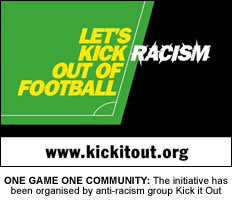 ENGLAND manager Fabio Capello has thrown his weight behind football’s equality and inclusion campaign, One Game, One Community.
The campaign, organised by anti-racism group Kick It Out, celebrate diversity and inclusion within the game and will run from 15 – 27 October.
The England boss is asking fans, players, clubs and community groups from the grassroots to the England team to join him in supporting 1000 events taking place during a fortnight long period to highlight diversity, equality and anti-discrimination across football.
“Football is more than a sport. It is a phenomenon with an international language all of its own,” said Capello.

“The One Game, One Community weeks of action shows all that is good about football. Our ability to work and live together and break down barriers should never be underestimated.”
Home fixtures at each of the 92 Premier and Football League clubs will be dedicated to the One Game, One Communitymessage as schools, community groups and fans take up the message with their own projects.

Professional footballers will be wearing Kick It Out t-shirts and many will be acting as ambassadors for the period. Aston Villa’s Ashley Young, Chelsea’s Michael Essien, West Ham’s Jack Collison and Tottenham’s Robbie Keane will all be representing their clubs during October.
Lord Herman Ouseley, chairman of Kick It Out, said: “The overarching idea behind the weeks of action is that the coming together of clubs, fans and local communities provides a focused, highly visible message of anti-discrimination. But over and above this it’s about connecting clubs, players and their communities in a unified message of diversity.”

Council change their mind on £70 tax increase after resident complaints

THE IDEA THAT BROUGHT DANGAL TO LIFE

All Internet Dating Sites & Apps. Under was a complete list of best wishes...