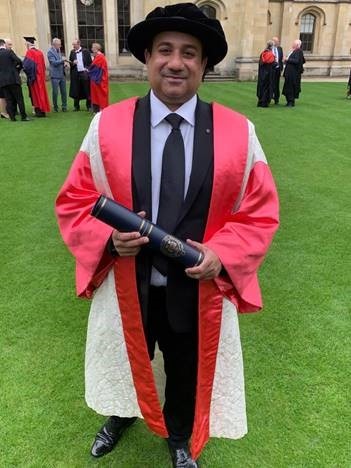 26th June 2019, London – Iconic Pakistani singer Ustad Rahat Fateh Ali Khan is in the UK to receive an honorary degree from the world renowned Oxford University today. The prestigious ceremony took place this afternoon in Oxford. An international music star, Qawwali singer Ustad Rahat Fateh Ali Khan was presented with the degree of Doctor of Music, as announced by the university previously.

Ustad Rahat Fateh Ali Khan said: “I am honoured to be accepting this degree from Oxford University, a world famous educational institution. This is a very special day for my family and I, but also for my fans, who have shared this journey with me. To be presented with this honour is a massive achievement and I am happy that my music has allowed me to reach such incredible heights.”

On receiving his honorary doctorate, Ustad Rahat Fateh Ali Khan is set to perform at Oxford Town Hall tomorrow, Thursday 27th June. The special evening will mark the occasion with a stellar performance of Qawwalis by Ustad Rahat Fateh Ali Khan, as well as explore his family legacy and look back at his career to date. All profits generated from the event will be used to enhance the Faculty of Music’s Sounds of South Asia series.

Ustad Rahat Fateh Ali Khan’s latest recognition will be one of his most distinguished to date. He is currently in the UK to receive his honorary degree as well as perform at a special event to mark the occasion the following day, Thursday 27th June.