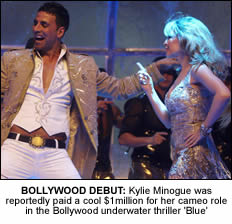 AUSSIE pop sensation Kylie Minogue is gearing up for the release of her first Bollywood film this week.
The pint-sized singer was reportedly paid a cool $1million for a cameo role in the underwater thriller ‘Blue’.
The film, which also stars Akshay Kumar, Sanjay Dutt and Katrina Kaif, will hit UK cinemas this Friday to tie in with Diwali celebrations.
The 40-year-old singer plays herself in the film, and also performs a set-piece song-and-dance routine alongside Akshay.
The song, entitled ‘Chiggy Wiggy’,has been composed by Oscar winner, A.R. Rahman, and has already become the films most popular song.
‘Blue’ will mark Kylie’s return to the big screen since Moulin Rouge in 2001.
Speaking earlier this year after returning from India where she shot her scenes for the film, Kylie said the offer of a Bollywood film was too good an opportunity to turn down.
“I didn’t know much of Hindi but it does not matter because everyone was very cooperative and I had fun and joy. I wanted to be part of Bollywood for a while and it was great opportunity that came by,” she said.
Kylie follows a number of high-profile celebrities who have secured cameos in big budget Bollywood films recently.
American rap mogul Snoop Dogg appeared in Singh is Kinng last year, while Hollywood stars Sylvester Stallone, Denise Richards and Brendan Routh appeared alongside Akshay Kumar and Kareena Kapoor in this summer’s hit Kambakkht Ishq.