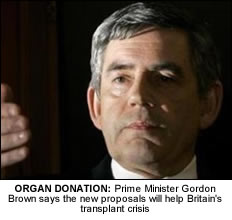 DOCTORS could remove organs from dead patients without consent if plans announced by Prime Minister Gordon Brown go ahead.
The move, which the government claims will help solve the transplant crisis and save thousands of lives, has been heavily criticised.
One Muslim group described the plan as “dangerous”, while the Tories and patient groups said the proposal would strip patients of their fundamental rights over their bodies.
Under the new proposals announced yesterday everyone in the UK will be presumed to be a willing organ donor unless he or she signs up to an “opt-out register” – or unless relatives object.
According to Government figures, 1,000 patients die waiting for a transplant every year while 8,000 are on the waiting list at any one time.
But Mohammed Shafiq, of The Ramadhan Foundation, said they would “strongly oppose” any attempt to push the new proposals through.
Mr Shafiq said organ donation was against Islam, although some scholars have argued there is nothing within Islam that forbids it completely.
Mr Shafiq said: “The Ramadhan Foundation is strongly opposed to Prime Minister’s intentions to introduce this policy of presumed organ donation, our faith Islam totally forbids the giving of organ donation after death.  We therefore join other religious communities in speaking out against this policy.
“In a free country people should be able to choose if they wish to consent, it is not the role of Government to decide to assume consent without the individual’s views and wishes taken into consideration.
“British Muslims will campaign against this infringement of our freedom to practice our faith.”

Plans to increase the number of donors will be launched by the Government tomorrow.