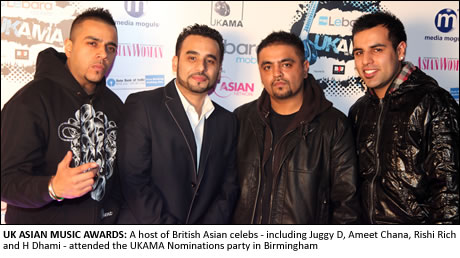 A HOST of British Asian celebrities descended on Birmingham as the shortlist of music stars nominated for the UK Asian Music Awards were announced.
The nomination phase has seen thousands of fans go online to nominate their favourite artists in the 13 chosen categories, including Best Male, Best Female, Best Album and Best Desi Act.
Amongst those nominated include Jay Sean for Best Male, Best Urban Act and Best Video, Mumzy Stranger with four nominations, and Birmingham’s very own Hard Kaur who was shortlisted for Best Female Act.
The glamorous Midlands bash also featured a showcase of some of the finest British Asian talent, with performances throughout the night from the likes of chart topping Bhangra singer, Foji, hot newcomer Gary Sandhu and reggae artist Roachkilla who performed their smash hit ‘Dil De De’, alongside desi heartthrob H Dhami, and pop sensation Mumzy Stranger.
After wowing the crowd, Mumzy Stranger, said of his nominations: ‘It feels great to be nominated for another UK Asian Music Award! I spent the majority of 2010 touring the country and making new music for the fans. It’s great to have a platform like the Lebara Mobile UK AMA that recognises and celebrates all the hard work that everyone in the industry puts in. After a spectacular show last year, the only way for the Lebara Mobile UK AMA is up. Fingers crossed I pick up an award in 2011!’
The Lebara Mobile UK Asian Music Awards will be held on 10th March 2011, and hosted by BBC Radio 1 and BBC Asian Network presenter, Nihal and BBC One’s Waterloo Road actress, Karen David.
The public are now invited to vote for their favourites under each category by logging back onto the official website, www.theukama.com