Home News Search on for ‘Most Inspiring Asian women’ 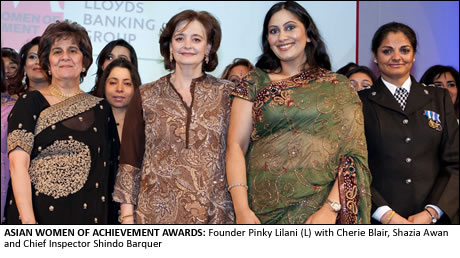 NOMINATIONS are now open for the 2011 Asian Women of Achievement Awards, the most established and prestigious programme recognising inspirational Asian women in Britain.
Founded and chaired by author and entrepreneur Pinky Lilani OBE, and held in association with Lloyds Bank Corporate Markets, the awards champion the contribution made by Asian women across British business, public, cultural and political life.
Over their 12-year history, the Asian Women of Achievement Awards have recognised, and provided a platform for an exciting generation of Asian female groundbreakers – such as comedy actress Nina Wadia; civil rights activist Shami Chakrabarti; and Ruby McGregor-Smith, the first Asian woman to lead a FTSE 250 business.
In 2010, winners included Farah Ramzan Golant, CEO of the UK’s largest advertising agency AMV BBDO; BBC news correspondent Razia Iqbal; and comedian Shazia Mirza. Winners were also recognised in fields such as social and humanitarian activity and entrepreneurship.
Judges this year include Zarin Patel, chief financial officer at the BBC; Phil Smith, CEO at Cisco UK and Ireland; and Helena Morrissey, CEO at Newton Investment Management.
Last year’s ceremony was attended by HRH Princess Michael of Kent; Home Secretary and Minister for Women and Equalities The Rt Hon Theresa May MP; James Caan, entrepreneur and star of TV’s Dragon’s Den; and film director Gurinder Chadha (It’s a Wonderful Afterlife).
Pinky Lilani said: “The Asian Women of Achievement Awards have for more than a decade demonstrated the impact Asian women are having across British business, society, entrepreneurship and the arts.
“Since the initiative began in 1999, the perception of Asian women in our society has changed dramatically. It is crucial that we continue to commend the great work they do and recognise their achievements in order to give future generations a collection of remarkable yet real role models.”
Kamel Hothi, Asian markets director at Lloyds Bank Corporate Markets, said: “Lloyds Bank Corporate Markets is proud to continue supporting the Asian Women of Achievement Awards. The Asian community is of huge importance to the fabric of British life and Asian women have made their mark in so many ways.
“As a bank we are committed to supporting the needs of the community wherever we can and through these awards we want to continue to give its rising stars the recognition they deserve.”
The closing date for entries is 2 March 2011, with the awards ceremony taking place at the London Hilton on 19 May 2011.
For information on how to enter the awards visit: www.awaawards.com