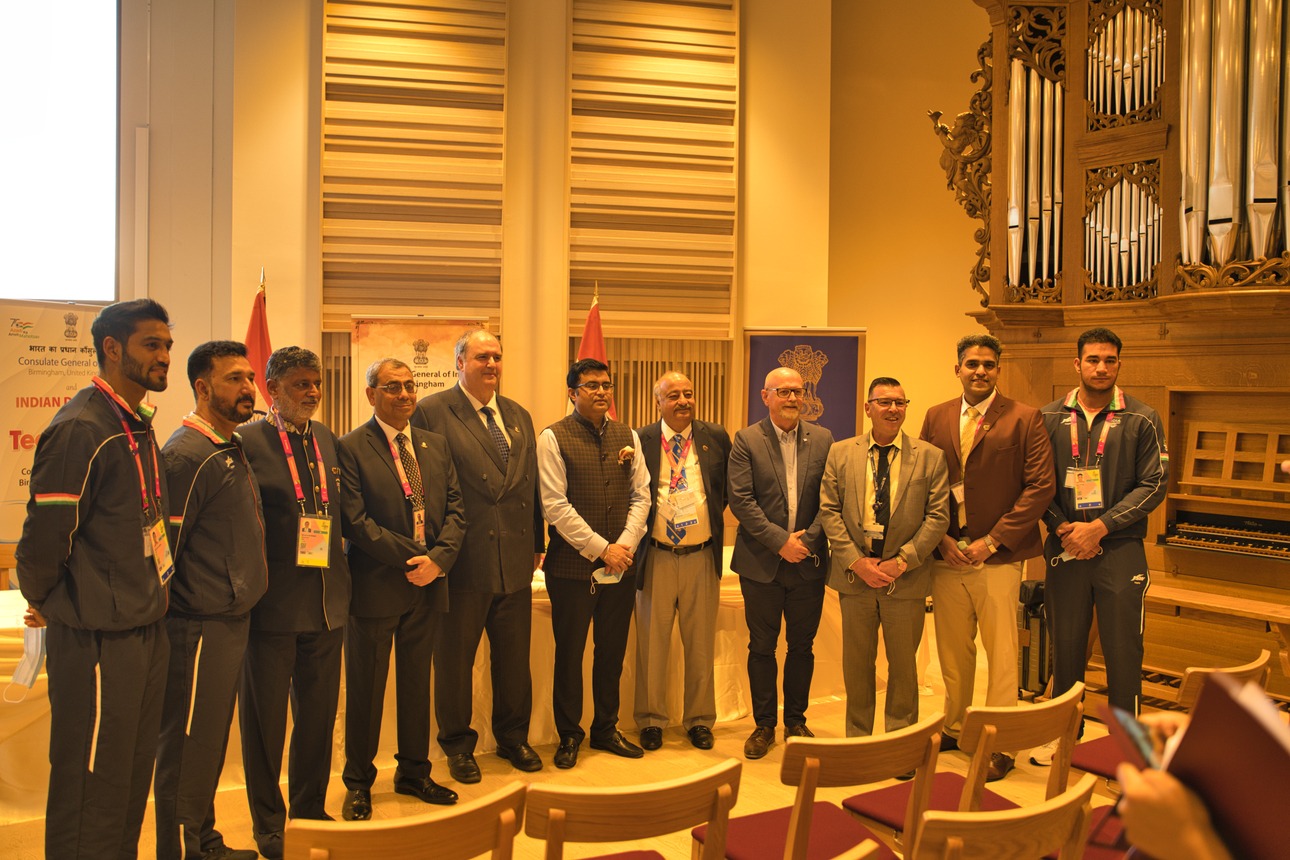 Members of India’s elite athletic squad were given a rapturous welcome by fans on arrival in the UK, as part of a special event organised by the Indian High Commission and hosted by Birmingham City University.

Hundreds of supporters from across the Indian diaspora, drawn from the worlds of education, culture, sport, and business, joined senior leaders and staff from the University and Indian government officials to honour boxing, gymnastics and squash professionals – in the country for the Birmingham 2022 Commonwealth Games – during the evening event at Royal Birmingham Conservatoire.

Athletes, coaching staff and members of the Birmingham-based Consulate General India were met by Birmingham City University’s Vice Chancellor Professor Phillip Plowden, Deputy Vice Chancellor Professor Julian Beer and Director of Sport and Physical Activity Mark Jeffreys, all members of the BCU India group, before being presented with gifts and being shown the renowned £57m music and acting school.

Professor Philip Plowden, Vice Chancellor of Birmingham City University, said: “Hosting members from Team India ahead of one of the biggest sporting events the city of Birmingham has seen was a tremendous honour.

“The event, delivered with our friends at CGI Birmingham, underlined our commitment to strengthening links between the UK and India – we have a clear ambition to celebrate and invest in education, culture, business and sport infrastructure projects delivering real impact for our domestic and international communities.

“We wish the whole Indian team the very best at the Birmingham 2022 Commonwealth Games, and look forward to following their progress over the coming weeks.”

The near capacity audience enjoyed food provided by leading Midlands Indian restaurant Bacaba and heard from Indian Consul General for Birmingham Dr Shashank Vikram, Acting High Commissioner Mr Sujit Ghosh, and Professor Plowden who took part in a ceremonial lighting of a lamp symbolising knowledge over and darkness and ignorance.

Consul General Dr Shashank Vikram welcomed the diaspora and lauded their spirit to cheer on Team India, highlighting that more than 65 Indian athletes are participating in Commonwealth for the first time before wishing them luck success, particularly apt in the year India is celebrating 75 years of Independence.

In recent months, Birmingham City University has celebrated the first phase of the opening of ground-breaking business innovation centre MBCIE in India in a partnership with India’s motorbike and cycle manufacturing giant Hero Group; hosted visits by acclaimed musicians Zakir Hussain,  Shankar Mahadevan, and Sartinder Sartaaj; signed a cultural Memorandum of Understanding with the Indian  government, and undertaken visits to the Punajb region in order to further develop cultural, business, political and academic links with India.