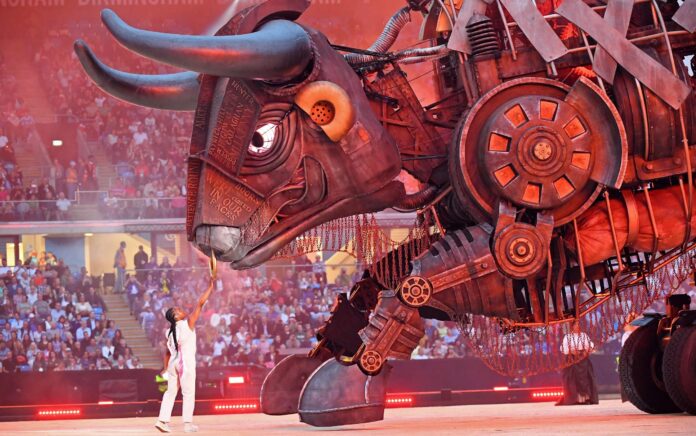 Birmingham saw the most spectacular opening ceremony for The Birmingham 2022 Commonwealth watched by 30,000 people at the Alexander Stadium last night.

The ceremony lasted around two-and-a-half hours and featured a giant bull, classic cars and swathes of performers telling the story of Birmingham’s heritage.

Throughout the performance, a video played showing a star falling to earth and various people, known as Stella and the Dreamers, collecting pieces of it.

The ceremony aimed to tell the story of the group as they discover Birmingham, meeting historical people from the city, who were depicted with giant figures, and learning about its past as they go.

The first part of the show concluded with 72 houses appearing in the stadium, representing each of the nation’s competing this year.

The Duke and Duchess of Cornwall arrived in style, driving in an Aston Martin as part of a convoy of 72 cars that formed into the union jack.

The City of Birmingham Symphony Orchestra then performed the national anthem alongside a choir and opera singer Samantha Oxborough.

As Stella and the Dreamers continue their journey, they were shown the fire of the Library of Birmingham in 1879, which destroyed several of Shakespeare’s works and the building.

She spoke about her experiences of the city.

The highlight and centrepiece of the ceremony was a giant mechanical bull – dragged into the stadium by 50 female chain-makers, leading actors to run and scream.

The beast was then “tamed” by Stella and the Dreamers and a bright celebration ensued with various different genres of dance performed.

As the dancers clashed, the once calm bull began to get agitated and the ceremony took a peaceful turn as performers came together to unite and restore peace.

Once the performances came to an end, competing athletes paraded into the stadium with Team England entering to We Will Rock You.

The night concluded with a musical performance from Birmingham band Duran Duran, who were accompanied by a spectacular fireworks display.

Over the next 11 days, more than 5,000 athletes from a total of 72 nations will compete in the Games across 19 sports.