Can the East-London star be as big as Jay Sean? 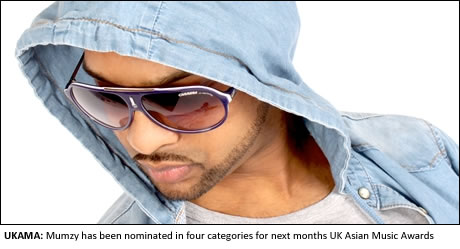 JAY Sean, MIA, Rumer are all leading British Asian Artists that have become successful recording artists in the mainstream music industry – but there is one artist who is looking to challenge that supremacy.
Mumzy Stranger looks set to steal the headlines at the UK Asian Music Awards this year after he became the most shortlisted artist for the upcoming awards show.
Leading the way with nominations in the Best Male, Best Album, Best Urban Act and Best Video categories, he may well just leave the likes of Jay Sean, MIA and Rumer in the shade at next month’s glittering bash.
In an era of generic urban music, Mumzy Stranger is slowly conquering the UK scene with a style that is entirely his own. Raised in Plaistow by Bengali parents, Mumzy’s music blends the bhangra and Bollywood beats of his childhood with the New Jack Swing riffs and reggae-inspired rhythms of his teenage years. Whether he’s rapping or singing, producing or songwriting, Mumzy Stranger’s wide-ranging musical abilities set him apart from the masses. Mumzy unleashed his distinct blend of bashment-flavoured R&B on the world through his remarkable debut album ‘Journey Begins’ which surfaced on 12.12.10 leaving Mumzy’s fans hypnotised by its originality.

The rising star certainly hasn’t gone unnoticed over the past 12 months grabbing the attention of the News of the world, Star magazine, Metro & Daily Mirror. His live performances have consistently gained positive reviews with one recent reviewer stating “….he’s a newer, fresher Jay Sean & Sean Paul integrated into one person…”

Mumzy’s eclectic sound is the result of a childhood spent soaking up the huge range of music being played at home via three older brothers. It wasn’t long before Mumzy made his first tentative steps towards developing his own style. “When I heard something I’d just copy it. It could be the riffs on a Bollywood track or verses from dancehall artists like Buju Banton and Shabba Ranx,” he says. Eventually, imitation gave way to creation and Mumzy began to pen his own bars. “Slowly I started writing raps. This was 2001 and I was heavily influenced by garage music, because most of my friends were making it.”


Living in the hub of the flourishing urban music scene, Mumzy soon began MCing alongside More Fire Crew and N.A.S.T.Y. Crew at the infamous garage raves of the era. But having grown up in a strict Islamic household, he was forced to keep his burgeoning music career under wraps. Luckily, Mumzy always had the support of his mum. When he started sneaking out in the middle of the night to MC on East London’s pirate stations she would cover up for him. “We were new MCs, and that was when Pay as U Go Cartel and Heartless Crew were killing it. So they would get the 8-10pm sets and we would get graveyard shifts at two in the morning,” he says. “I used to sneak out the house and my Mum would cover up for me.”


Despite his involvement in the UK scene at such a crucial and exciting time, Mumzy felt alienated from his peers. It was at that time that he took on the moniker Mumzy Stranger, a name that initially reflected his sense of isolation but now represents his personal life philosophy.

“My mum used to say you’re born as a stranger. You live as one. You die as one. No matter what you do in life, you can’t change that you came into this world on your own and you can’t change that you will leave on your own. But if you don’t back bite, interfere in other people’s business or affiliate yourself with the wrong things, then you can stay like a stranger and be truly focused,” Mumzy says.


It wasn’t until he started studying at the University of Westminster that Mumzy finally began to find himself as a person and as a musician. Exposed to life beyond his East London neighbourhood, Mumzy embraced the new experiences that university life presented. “My confidence grew and my mind expanded. Basically, I grew up. ”Encounters with other Asian students also opened his eyes in other ways. “Because I’d always been around the urban underworld, I never knew about the Asian cultural scene in the UK. The melas, the BBC Asian Network, all of that. I was shocked. Until then, I’d felt like I was the only one making urban music ‘cause I was so soaked into my own ends. I didn’t know about the outside world.”


Some of Mumzy’s new friends worked as promoters working on the Asian club circuit, and they soon started booking him to perform at melas and club nights. It was then that Mumzy began to develop the confidence he needed to share his talent with a wider audience. ‘For the first time I was getting a lot of support. The Asian club circuit was so different from doing Last Man Standing in Romford alongside N.A.S.T.Y. Crew. Then, bottles were getting thrown about and I used to get into fights. You’d have to think about how to get out of the club before you got beaten up. That garage scene was hard. Going into a more civilised uni crowd, I felt a lot more support.’


Throughout this time, Mumzy continued to produce music out of his secret bedroom studio. A friend secretly entered one of Mumzy’s tracks into the BBC Asian Network’s ‘Unsung’ competition in 2005. Although he didn’t walk away with first prize, he did leave the competition in Birmingham with the phone number of acclaimed producer Rishi Rich, who had approached Mumzy to tell him he had personally cherry-picked him as a finalist.


Two years later, as a graduate, Mumzy finally went into the studio with Rishi Rich. It was under Rishi’s guidance that his innate musical ability began to fully flourish. Already a talented singer, rapper and producer, Mumzy was able to mature as an artist, as well as refine the unique blend of reggae, R&B and bashment that he had been cultivating since his early teens.


His success led to him winning Best British Asian Urban Act at the 2010 BritAsia awards. The rising star has lent his vocals to the likes of ex-Eastenders actress & singer Preeya Kalidas and many more. But Mumzy is determined that he won’t be pigeonholed. “I’m not an Asian doing R&B music. I’m a soulful, R&B, bashment artist who happens to be Asian. I don’t need to be put under any category.”


As Mumzy continues to work on developing his career further, he balances on the cusp of mainstream stardom. But whatever comes next for this incredibly determined and focused artist, you can be certain he’s ready to face it head on. “Because I’ve had such a difficult ride, I welcome anything harder. I’m still on the ride. I don’t feel like my ride’s stopping. I’m on a rollercoaster and I don’t want to get off.”