‘I will still give 100 per cent to club’, says transfer-listed defender 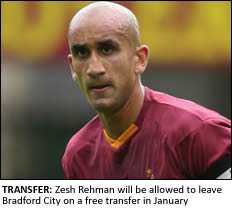 BRADFORD City defender Zesh Rehman has expressed his surprise after he was transfer listed by the club.
The 27-year-old was also stripped of his captaincy and is expected to leave the club on a free transfer when the transfer window re-opens at the start of January 2011.
The club said the decision had been taken due to a “disciplinary matter.”
Rehman, the first British Asian to play in the Premier League, has made 12 starts for the club this season but in recent games has been an unused sub.
In an interview with BBC Radio Leeds he expressed his disappointment at being out of the starting eleven.
But speaking to skyports.com he said he was still prepared to give 100 per cent to the club despite recent developments.
“I’m at the club and will continue to give 100 per cent when called upon as always,” he told skysports.com.
“I’ve worked 24/7 on and off the pitch for the club, as I have done for every club I’ve been at. The fans have been good to me since I’ve been here and I really appreciate their continued support.
“I’m aware of how quickly things can change in this game and you can never say never.
“I have played in all four leagues and have always received praise for my professionalism, work ethic and attitude.”
Related Articles
Rehman set to leave Bradford

The Benefits of high quality Childcare

Sky’s the Limit for Jasmine Dotiwala