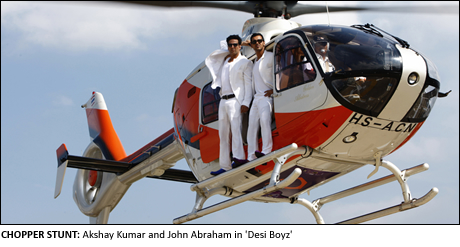 BOLLYWOOD stars Akshay Kumar and John Abraham recently shot a risky stunt for the title track of their forthcoming film, Eros International’s Desi Boyz, directed by Rohit Dhawan.
Dhawan wanted this particular shot in the title song of the film in which Akshay and John climb down from a moving chopper. However, he was worried for his actors because of the risk involved.
Akshay heard about this and immediately wanted to do the shot as he loves action. John too loves action and wanted to give it a try. The helicopter scene required them to do the stunt without a harness, as both of them had to wear whites in the scene and a harness would have been visible in the close-up shots.
Despite it being a very risky shot where the actors had to step out of the chopper mid –air with no strapping, both the actors were quite convinced about the shot and insisted on going ahead with it.
A source on set reveals: “Director Rohit Dhawan was very nervous about his actors doing something as risky as this but the two actors went ahead and did the shot confidently in a single take.”
Desi Boyz releases next month and is the first time in seven years actors Akshay and John will share screen space.
The duo go back a long way after their partnership in ‘Garam Masala’ which went on to become the biggest Blockbuster of 2005.
Talking about reuniting the ‘Garam Masala’ duo Rohit says: “Akshay was on board from day one, when I was still developing the story idea. A two-hero movie is never easy to write and it took me almost two years to put this project together. Once I felt I had justified the presence of both the protagonists, I took the script to John who’s been like a buddy since I worked as an assistant director on dad’s film, Hook Ya Crook (2010). He was convinced immediately.”
Eros International’s Desi Boyz directed by Rohit Dhawan releases 25th November 2011.