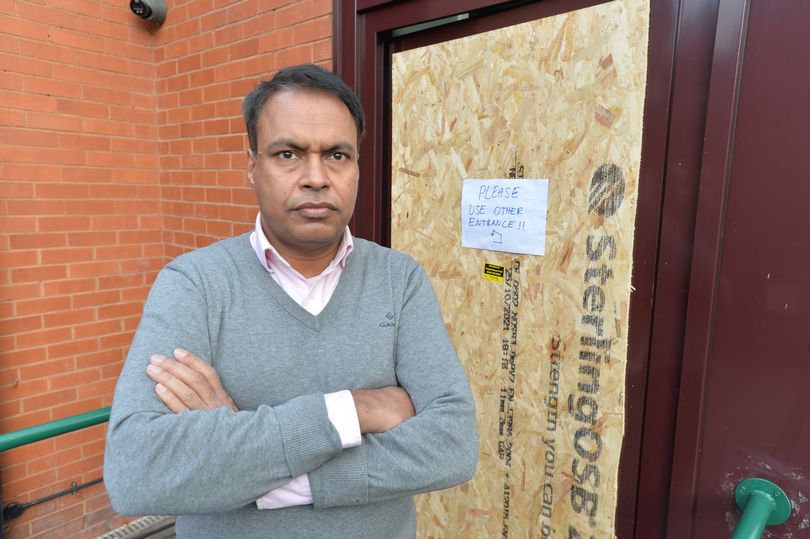 An award-winning buffet restaurant in Leicester has been left with a huge bill after a number of breaks in.

Syed Rahman, who was awarded the British Empire Medal in 2020 for helping raise hundreds of thousands of pounds for charity, has seen his restaurant, Chef & Spice, broken into four times in the past six months.

Syed has spent over 14k on repair and security bills.

He said: “The cost is unbearable. We’re insured but with the cost of the excess payments and the affect it would have on our premiums it’s not worth claiming.

“With the recent lockdowns the industry is already suffering.

“The break-ins could have caused any other restaurant to close.”

Last Thursday morning at 2.50am burglars smashed their way through the entrance door using a metal item and stealing the cash registers – containing about £150 in cash.

They also made off with two tablet computers and some bottles of alcohol.

Two other doors were also badly damaged as the criminals tried to get inside.

Previous break-ins have also seen expensive damage to the doors and thefts of cash and alcohol from the premises.

Syed, who also owns Cuisine of India in Wigston, said: “There have been no arrests. Each time the police come and have a look around but the CCTV images have not identified anyone so far.”

Syed’s two restaurants have helped raising nearly £700,000 for local and national good causes, which led to him being included in the Queen’s New Year’s Honours List in 2020

A police spokesperson said: “Shortly after 3.15am on Thursday a report was received that a restaurant in Hinckley Road was being broken into.

“Officers attended and on arrival found that a quantity of cash had been taken from a till. Two Samsung tablets and two bottles of alcohol had also been taken.

“Police would like to speak to anyone in the area who saw a person or people acting in an unusual or suspicious manner around the time the incident occurred.

“Officers from the Neighbourhood Policing Area (NPA) will continue to undertake further proactive foot patrols around the Andrewes estate.

“Anyone with dashcam or CCTV footage is also asked to contact police, quoting reference 22*036722.”