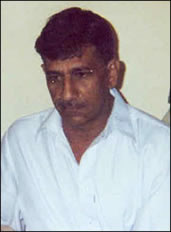 GRIEVING relatives of an Accrington family killed in a devastating arson blaze on their family home may never know the motive behind the attack, police have said.
The frank admission by detectives investigating the blaze came as the only survivor of the fire, 49-year-old Mohammed Riaz (pictured right) died in hospital three days after his wife, Caneze Riaz, 39, and their four daughters, Sayrah, 16, Sophia, 15, Alicia, 10 and three-year-old Hannah, were killed in the fire.
Mr Riaz had been rescued by firefighters from the blazing house and was resuscitated before being rushed to hospital suffering from 50% burns.
Police had named the factory worker as their prime suspect, but his death, Detective Chief Inspector Neil Hunter said meant the motive behind the attack may never be known.
The couple’s older son, Adam Riaz, 17, survived the attack after being admitted to The Christie Hospital in Manchester where he was being treated for leukaemia the night before the disaster.
“The reason why this tragedy happened is the key element that is missing from our jigsaw”, Detective Chief Inspector Neil Hunter said.
“Mohammed was the only one who could provide us with the information as to why this happened.”
Mr Hunter, who said Mohammed Riaz was the prime suspect, added: “Now he has died we are unable to get the information directly and we will have to rely on our forensic team and their investigations.”
Forensic examinations of the house revealed that whoever started the blaze had not left the house.
Police said accelerants were used to start the fire and all doors and windows were locked from the inside.
The deaths have stunned the close-knit Asian community who described Mrs Riaz as a “pillar of the community”.
She had headed a child improvement programme in the area’s Hyndburn Cultural Association as well as working on diversity issues with local football club Accrington Stanley.
The duo had been married for 20 years.

But police had been investigating suggestions that Mohammed Riaz and his wife had suffered a marriage breakdown.
The duo had fought outside their home on the night of the fire but there was nothing to suggest, Mr Hunter said, that the fight continued indoors.
It emerged that Caneze Riaz had left her husband at home to go out with another man just hours before she was killed in the blaze.
Sources say they had visited her son in hospital before having dinner in Manchester.
There was also the suggestion that Mr Riaz had become depressed over his son’s battle with leukaemia and was feeling increasingly isolated from his wife Caneze.
The children, described by neighbours as “little angels”, had been enjoying a Halloween night party just hours before the fire.
In the early hours of the morning fire crews rushed to the house after receiving a 999 call.
Caneze Riaz and her four daughters were rescued from the property but were pronounced dead at the scene.
Mr Hunter said: “Fire and smoke spread very quickly.
“If they weren’t asleep there would have been more of an attempt to escape the property.”
Police have said they are not looking for anyone else in connection with the fire.