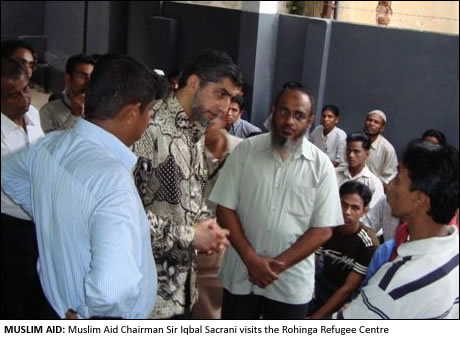 BRITISH charity Muslim Aid celebrates 25 years of reaching out to the world’s poorest communities. Zeenat Moosa spoke to the charity’s Chairman Sir Iqbal Sacranie.
Muslim Aid is celebrating turning 25 years – what was the main of setting up the charity?
Muslim Aid was founded in 1985 by leading British Muslim organisations responding to the endemic humanitarian crisis in Africa. The incredible support that our emergency relief projects received, inspired and motivated all the founders not just to continue, but to expand and explore more opportunities to offer a hand to people in need around the world.
In 1986, Muslim Aid expanded its emergency aid projects to help those affected by continuing conflicts in Afghanistan and Palestine and the devastating floods in Bangladesh. By the early 1990’s, Muslim Aid’s emergency relief projects had helped millions across Africa, Asia and Europe.
Whilst continuing to deliver emergency relief, Muslim Aid also began to implement long-term development initiatives, all of which focused on tackling the root causes of poverty, to which Muslim Aid remains committed. 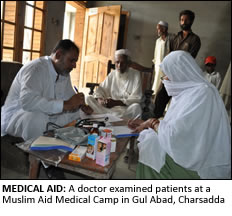 For those of our readers who may not be familiar with Muslim Aid, what projects have you covered and where do you work?
Long term development programmes include Education, Water and Sanitation, Health care, Microfinance and livelihood, Housing and Reconstruction, women’s development, child sponsorship, UK development projects. Muslim Aid is also a leading charity in Emergency and Disaster response programmes. We delivered immediate rescue and recovery programmes within few hours after the Tsunami in Indonesia, Cyclone Sidr in Bangladesh and Earthquake in Pakistan
Moreover we have seasonal programmes such as Ramadan and Qurbani to provide food aid to poor and needy people around the world.
Our 13 field offices (including two regional co-ordination offices) follow Muslim Aid’s Mission to help alleviate poverty, provide education for all and the provision of basic amenities for those in need; in order to create a world where charity and compassion produce justice, self reliance and human development.
Education Really Matters (UK Development) raises awareness of and explores ways to tackle poverty in the UK. The three year project, now in its second year, has created a pen pal network between four Islamic schools in London and young people supported through Muslim Aid’s global Rainbow Family Child Support Programme. Displays illustrating the knowledge children have gained from the experience have been exhibited in schools across London. The project aims to raise awareness among young people in London about the challenges faced by children in accessing an education in developing countries.
The Pathways to Citizenship Programme, funded by London Councils, is part of a strategy to inspire and improve effectiveness of organisations working with young people to help tackle the causes and consequences of disaffection. The project seeks to engage a wide range of projects and organisations from the Muslim community within London. This includes capacity building of organisations within London Boroughs, increasing support to improve provisions for young people, developing organisational accreditation, providing networking opportunities and developing support for community leaders in understanding the concerns of young people.
In those 25 years what has been the proudest moment for Muslim Aid?
The 25th Anniversary year has been a year for reflecting on our previous work and realizing how much of a difference has been made. I think reaching this milestone has been a great achievement. We are delighted to see that over past 25 years Muslim Aid has secured a place as one of the most trusted and respected charity in the hearts and minds of millions of donors and beneficiaries across the world. 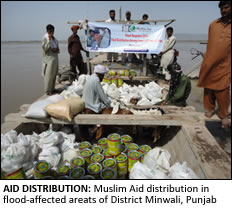 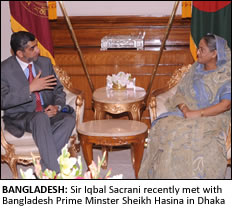 And in terms of Bangladesh and the devastation that hit there – how is the country coping?
Muslim Aid has a strong track record in Bangladesh. It is one of our largest recipients.
Muslim Aid in Bangladesh employs over 1000 staff in over 60 sub-offices and projects around the country and works in 55 of the 65 provinces. The current number of beneficiaries in Bangladesh has risen to 1.5 million. Muslim Aid has helped to lift people out of extreme poverty so that they can now earn a living on their own. This is a very positive turnaround in the context of Bangladesh, where 40% of the population lives below the poverty line. Amount in projects spent in 2009 was £3.5 million covering emergency, shelter and micro financing.
A recent trip to Bangladesh was a way of checking that the money raised by the donor community was used in the best possible way. During the short tour a general review was conducted of the projects and programmes in the areas of Moheshkhali, Teknaf and Dhaka. In total 8 projects sites were visited.
Meetings were held with Field Office Programme Managers for reviewing their programmes and issues.
Your message to our Muslim readers?
Muslim Aid is proud of its community base. We are very appreciative and grateful for their continuing support. We view this as the ultimate hallmark of a responsible community. With their donations and support they have awarded us the opportunity to make their contribution reach the needy beneficiary. Coming back from Bangladesh and seeing the work we have done there, I can find no words to describe the deep feeling of satisfaction at sharing in making a difference to the lives of those in need of help. We assure our supporters that we are continually striving to cut costs and improve our services to help people around the world.