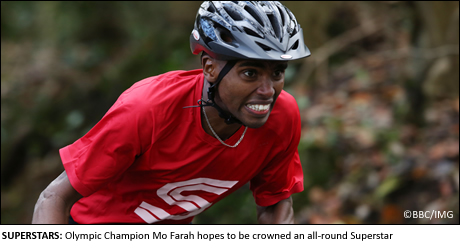 HIS face lit up the London Olympic Games as he raced to double Gold glory. Yet Mo Farah isn’t content with his glorious Gold medals – he wants to end the year as champion of Superstars!
Sixteen of London 2012’s British Olympic heroes (eight men, eight women) will compete against their Team GB teammates in a dramatic and thrilling competition – to be aired on BBC One this Christmas – as they vie to be crowned the two best all-round Superstars.
Here Mo talks about being part of the show.
What appealed to you about taking part in Superstars 2012?
Anyone who knows me knows I like to compete and push myself.  So when I got asked about this I was really excited to take part.
Which event are you most looking forward to?
Well obviously I would like to do the 100m and 800m – a bit shorter than I normally run but I should be OK in them.  So just for a different type of test I’m looking forward the bike hill challenge.  I think I can use my endurance to good advantage here.
Are there any of the events that you are apprehensive about taking part in?
Definitely the swimming – I can’t swim.
What training have you undertaken to prepare for it?
I’m back doing my own training now so I’m getting fit again but I haven’t really being doing anything specific.
Do you have any superstitions or rituals that you’ll want to do before each of the events?
When I’m racing I’ll always do my morning jog in running tights and shave my head on the day of the race.  But for this I think I just need to stay focussed and maybe watch what some of the other competitors are doing, as I may be able to get some tips from them.
Superstars will be shown over Christmas.  What are your own Christmas TV favourites? And what are your plans for this Christmas?
My plans for Christmas will be to spend as much time with my family as possible.  I’ll be going away training in the New Year and won’t see them for a while so it’s important to be with them while I can.  But what I do like about Christmas is there is lots of football on TV so I’ll try and catch some Arsenal games!
Catch Superstars on BBC One this Christmas

Shak Khan – Beast from the East