Pusher: The Gangster film with a touch of Bollywood 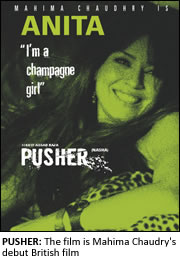 BOLLYWOOD legend Mahima Chaudry will visit Feltham this month for the region’s premiere of her first British movie.
The actress, best known for her role in Pardes – for which she won the Filmfare Award for Best Female Debut – will make a guest appearance at the Air Park way Cineworld on Friday 15.
She will join a string of celebrities, cast and crew at the premiere of Pusher, her debut British film.
The British-Hindi movie – a remake of the 1996 Danish crime film of the same name – has already caused a stir for its controversial storyline.
It has been banned in some independent cinemas in Mumbai, India, for its ”shocking, drug-fuelled violence”, with religious leaders claiming it ”borders on the psychotic”.
They likened it to a more disturbing version of Scottish cult flick Trainspotting, and fear it could leave more sensitive viewers psychologically damaged.
There are now calls for the film, which stars Bollywood beauty Mahima Chaudhry, to be banned in all cinemas across the Indian capital.
Speaking earlier this week, Mahima urged fans to watch the film and said she was ”delighted” about meeting residents on the night.
”I am thoroughly looking forward to visiting Feltham and West London,” she said. ”I’ve visited the UK a number of times, but this will be the first time that I will have spent any length of time in this wonderful area of the city.
”I look forward to exploring Feltham, and also to meeting fans before and after the premiere.”
Pusher tells the story of Salim – played by director/writer Assad Raja – , a low-level Asian drug dealer who works the streets of London.
One disastrous deal follows another, and Salim quickly finds himself on the wrong side of some of the capital’s most dangerous criminals.
Raja hit upon the idea of making the film filmed in London and the Midlands – following his own frustrations as an actor in the UK.
He said: “As a British Asian, I found it extremely difficult to get a decent role in British films, TV shows and even on the stage. I kept finding that most roles were extremely stereotyped and limited to such things as ‘corner shop keepers’ or ‘token Asian family’ in a predominantly white-dominated soap.
“I wanted to challenge this and very much wanted to make an Indian language Brit-film in this crazy, gritty style. Nothing like this has been done in British, Asian or so-called Bollywood cinema ever before.”
Despite a potentially controversial script, Raja secured the talents of actress Mahima Chaudhry, and musicians Panic Cell, Apache Indian, S.Kalibre and Glasgow-based Bhangra group Tigerstyle.
It has already received several glowing reviews, and has achieved an almost cult-like status among British Asian film buffs.
But not everyone agrees. Clerics in India believe Raja has “brought shame” on the Muslim community.
Shammim Baig, from the Abu Hanifa mosque in Mumbai, said: ”Films like this are destroying the core fabric of Muslim morals. It sleights a community by portraying them as drug dealers, gamblers and people who consort with prostitutes.”
”The content of the film – sex, drugs, gambling and violence – defy Islam teachings, and will harm future generations”.
”The director should feel nothing but shame.”
For more information log onto www.pushermovie.com