Duo hook up for remix of ‘So Much’ 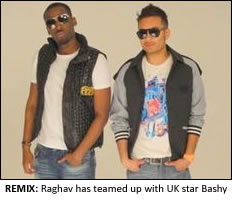 RAGHAV’S brand new single So Much has been given a UK twist!
A brand new mix features grime star Bashy and is set to cause a stir in the UK’s urban scene.
Alongside versions featuring Kardinal Offishall and Bhangra star H Dhami, Bashy adds a new dimension to So Much, which was produced by the UK’s producer of the moment Labrinth.
The track is set to blow up across the UK airwaves this month and has already reached number 5 on Ronnie Herel’s R’n’B chart on BBC 1xtra.
Commenting on the hook up, Raghav said: “I wanted to do a mix specifically for the UK urban market and for all my fans here. Bashy is currently making his own waves in the UK as an MC and an actor and he did a great job on ‘So Much’ so it made sense to have him on the track. This mix is getting everyone even more excited!”
So Much will be released in the UK on 15th November and is taken off Raghav’s forthcoming album The Phoenix.