Has Anil Kapoor bagged himself a role in 24? 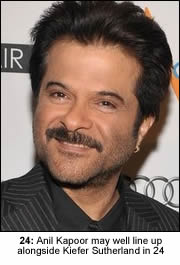 THINGS just seem to be getting better for Bollywood actor Anil Kapoor.
If reports are to be believed he may well have bagged himself a role in the hit American drama 24. Various media outlets have reported the actor will play an anti-terrorist cop alongside Kiefer Sutherland in the award-winning drama’s eighth season.
The news comes off the back of the actor’s success in the Oscar winner Slumdog Millionaire.
But it seems Anil doesn’t want to count his chickens too soon. When asked about the rumours he told Indian news agency IANS: “It s too early to say something. Negotiations are still going on. So, I can t confirm you anything at this stage. It s my agency in LA which is handing all that.”

But an unconfirmed source from the production house said: “Anil would play Jack Bauer’s counterpart in India. It’s not known yet whether Anil will appear in just one episode of whether he’ll be a recurring character. Either way the producers are very excited about having him onboard.”