Birmingham Lord Mayor Abdul Rashid in ‘I am British, I am Muslim’ campaign trip 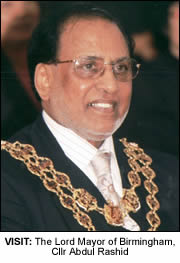 A RECENTLY-appointed ‘Ambassador for Peace’ from the UK has flown out to Pakistan this week.
The Lord Mayor of Birmingham, Cllr Abdul Rashid, will be visiting the troubled Asian Republic at a time of heightened political tensions. The official tour will include visits to the Punjab and Azad Kashmir provinces, where the Lord Mayor will meet high-ranking dignitaries and speak at events promoting greater understanding of British culture and commerce.
The Lord Mayor has been heavily involved in recent international efforts by the Foreign Office to promote a better understanding of Muslim life in Britain.
The “I am British, I am Muslim” campaign is currently advertising on Pakistani TV, radio, print media and billboards in order to demonstrate the breadth of success that has been achieved by Muslims in the UK. Cllr. Rashid is one of ten British Muslims profiled by the campaign, which also includes contributions from government minister Sadiq Khan MP and professional cricketer Moeen Ali
The Lord Mayor, who was born in Azad Kashmir, explained his enthusiasm for the journey to his motherland: “My visit will promote trade links between two nations which have so much shared history. I will also be working hard to overcome commonly-held misconceptions about what it means to be a British Muslim. Showing that Muslims make an invaluable contribution to the social, cultural and economic well-being of the UK – and are recognised for this – will go a long way towards counter the disinformation peddled by extremists to recruit young people to their immoral cause.”
The nine-week “I am Muslim. I am British” campaign is the brainchild of Midlands-based community cohesion campaigner Dr. Kurshid Ahmed, who added: “There is a belief in some parts of the Muslim world that the West is ‘anti-Muslim, anti-Islam’, but this could not be further from the truth. This project is about confronting these misconceptions, by communication through TV, radio, in the press and, most importantly, face-to-face.”