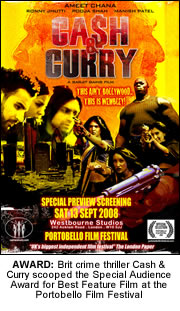 A BRITISH crime thriller starring a host of Asian faces has scooped the Special Audience Award for Best Feature Film at the Portobello Film Festival 2008.
Cash and Curry, directed by Sarjit Bains scooped the prize following its world premier screening at Westbourne Studios in front of a packed audience.
Sitting amongst the audience was Hollywood actor Joseph Fiennes who threw his support behind the film.
“It was a pleasure to come along and lend my support,” he said.
“Films like Cash and Curry which have been made on a small budget and are keeping the British film industry alive”.
Cash and Curry was made for a modest £30,000 but attracted a host of star names including ex-Eastender’s Ameet Chana, Pooja Shah and Ronny Jhutti.
Despite the film having yet to find a distributor, Portobello Film Festival director Jonathan Barnett said he amazed at the reaction of the audience watching the film.
“I have seen nothing like it really. The cinema holds 200 people comfortably but on the night of the premiere we had over 500 people trying to get in,” he said.
“It was a crime film but it had some very funny moments too. I hope the film gets a distributor because the audience loved it and the cast and crew deserve it”.
Director Sarjit Bains said: “I am absolutely delighted that the film has been given the seal of approval not only by such a prestigious film festival but also by the audience. This film is a little bit different from the British gangster flicks we have seen in the past”.
Previous winners of the award have included John Malkovich, Woody Allen and Guy Ritchie