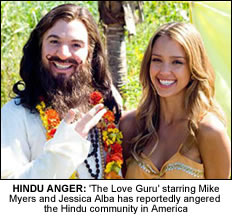 MOVIE giants Paramount have been accused of ‘lampooning Hinduism’ after trailers of a new Mike Myers film were released in America.
Members of the Hindu community in America are said to be outraged over Paramount’s big summer comedy ‘The Love Guru’, reports have stated.
The film, which stars Mike Myers, Ben Kingsley, Jessica Alba and Justin Timberlake, tells the story of Pitka (Myers), an American abandoned in an ashram in India as a child who later returns to the US as a guru to seek fame and fortune.
Rajan Zed, a leading Hindu figure in America, said he was “deeply concerned” after watching a trailer for the film.
He told Indian website DNA India: “I was deeply concerned after watching the trailer. It appears to be lampooning Hinduism. Hindu terms are also used frivolously. It appears to be lampooning Hinduism and perpetuates stereotypes of Hindus.”
Paramount has reportedly offered to arrange a special screening of the film to a Hindu audience before its US release in June.