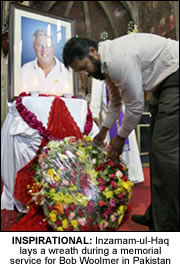 FORMER Pakistan captain Inzamam-ul-Haq has revealed he will never forget the contribution Bob Woolmer made during his time as coach of the national side.
Twelve months on from Woolmer’s shock death just hours after watching his side crash out of the World Cup, Inzamam paid tribute to the former coach in an exclusive interview with AFP.
“Pakistan cricket will always be indebted to Bob Woolmer for his contribution to the game,” Inzamam said.
“I want to forget the tragedies of the World Cup, but I can never forget Bob. He was not only an excellent coach, but also a very good human being.”
Woolmer, 58, was found dead in his hotel room on March 18, 2007 in Jamaica a day after Ireland knocked Pakistan out of the World Cup.
The investigation that followed rocked the cricketing world with accusations of murder and a match-fixing scandal.
An inquest jury in October eventually returned an open verdict.
Inzamam stepped down as captain of the side and quit Test cricket in the aftermath of Woolmer’s death.
“He was helpful to all and very accommodating. He always thought about the team and saw to it that we kept improving,” added Inzamam.
“After the defeat to Ireland we were all depressed but Bob was trying to console everyone and was trying to convince us that it was just a bad day and things would improve for the team.
“He asked me what were my plans. I told him that my mind was not working and we would talk the following day, but that opportunity never came and we got the shocking news of his death.”
Inzamam added he would not hesitate in helping out at a special cricketing academy set up in South Africa by Woolmer’s family.
“I feel for his family because they are the real sufferers. Whenever they need me to coach at Bob’s academy, I will be more than willing to go,” said Inzamam.
“Perhaps through this we can pay back for what he did for Pakistan.”