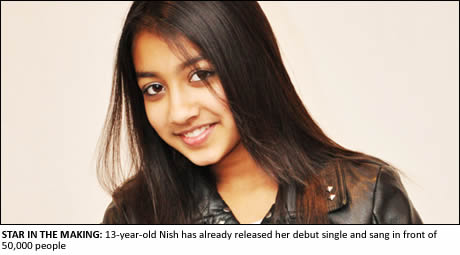 WHILE most young teenagers are busy watching Hannah Montana, Selena Gomez and Demi Lovata singing their way to the top of the charts, 13-year old Romford Girl, Nishma Asher AKA Nish is living the dream herself.
The stunning teenager, who has just turned thirteen, can already call herself a popstar after releasing her debut single ‘Ji Lay’ last month and singing to 50,000 people at London’s Diwali festivities in Trafalgar Square.
The debut single shows off Nish’s linguistic skills as she sings in English, Hindi and Punjabi and sees her teaming up with Punjabi rapper Kan D Man and grime artist Rude Kid.
The multi-talented youngster, who goes to Bower Park School in Havering, started singing at the age of 3 and gave her first public performance at the age of 6! With only her family behind her and no formal training, she learned to play the guitar and keyboards by watching videos on YouTube!
This super confident little girl has performed in front of thousands at melas, festivals and indoor venues and is now embarking on a journey to take her unique act to a wider global audience.
Nish says of her entry into the music world: “This is my dream come true! I’ve known from a young age that I wanted to have a career in music, but never thought it would come so soon. My friends at school can’t believe that I’ve got this opportunity and all want to be in the next video!”