Home Sports They Came, They Scored, They Conquered! 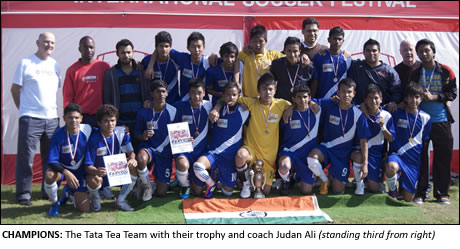 A TEAM of young Indian village kids have proved the country does have footballing talent after beating some of the world’s highly-rated youngsters at the Arsenal International Soccer Festival.
The Under-15s Tata Tea team were plucked from various locations across India and flown to London for a once in a lifetime opportunity.
But what they lacked in relative experience, they more than made up for in belief and passion as they stunned the tournaments number one seeded team to take the title with a 1-0 victory in the final of the Arsenal International Soccer Festival at the Royal Holloway University last month.
The teams coach, Brit Asian Judan Ali believes the win is clear evidence there is a wealth of untapped footballing talent in India.
Judan, a former Arsenal player who once played alongside Ray Parlour and Paul Merson, praised his players and said victory was “what dreams are made of.”
“I still can’t believe the journey from beginning to end and how these boys coming from poor humble backgrounds transformed into men at this tournament,” Judan told The Asian Today.
“They hadn’t even ventured out of their villages let alone getting on a plane; it’s what dreams are made of.”
For the youngsters their journey to London started earlier this year when India’s Tata Group invested in a project to discover the next generation of footballers in the country.
A handful of qualified coaches – which included Judan – were tasked with scouring the country to find talented youngsters through a series of trials.
The final 16 selected to travel to London for the tournament were chosen out of a phenomenal 20,000 applicants.
With the coveted festival win under their belts, many of the youngsters have now returned to their normal lives in India.
But for some, involvement with the Tata Tea team has led to bigger opportunities with three youngsters joining youth academies of professional clubs in India. 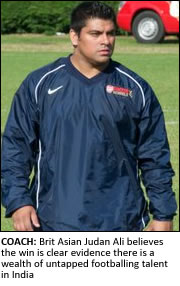 For Judan this latest development is a powerful sign of his own personal campaign to get more Asians into the game.
“I have been campaigning all my life and fighting stereo-types in British Football that Indians cannot play football,” says the former Arsenal player.
“I was always confident that I would find talented footballers in India who could compete on a world scale.”
Judan’s own dreams of becoming a professional footballer began as a young child growing up in East London.
While his parents were keen for their young son to excel academically, Judan himself was immersed in the beautiful game. His dedication led to a spell at Arsenal which saw him play alongside future Gunner greats Ray Parlour and Paul Merson,
But Judan was to find life as a footballer hard. Leaving home he travelled across the country in the hope of securing himself a professional contract.
Thirty-two unsuccessful trials later and Judan opted to leave Britain after securing a contract to play in the Spanish lower league in Murcia.
His life story has even made it onto the big screen of Bollywood with the 2007 John Abraham and Bipasha Basu film ‘Dhan Dha Na Dhan Goal’ based on his journey as a British Asian trying to make it as a footballer.
Judan admits his struggle to be part of a sport he has loved since a child has made him even more determined to offer opportunities to Asian youngsters.
“I’m working on a few projects at the moment, imagine an X Factor version of football, that’s what I’m doing in the UK at the moment,” Judan says.
“At the same time I’m looking to set up an academy for individuals like myself who found it hard to break into professional football here in the UK. I’m confident that I will find the next British Asian star.”
It also has been rumoured that Blackburn Rovers Indian owners may be interested in gaining Judan’s services.
With his diverse life and career so far, the sky’s the limit for Judan Ali who could possibly be on track to become the first Asian Premier League Manager.

Remember that if an exclusive loan provider cancels your loan, you’ll have to submit...