Election 2010 – Your Choice Your Vote 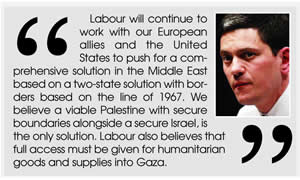 Labour’s international policy is driven both by Britain’s national interest and our long-standing belief in international social justice, liberty, fairness and responsibility. Labour knows that our country is best served by the strength of our permanent values and interests – and by our strong alliances around the world.

In today’s interconnected world no country can survive in isolation. That’s why we will continue using strong international relationships – whether with key allies such as the USA or through international institutions such as the European Union – to ensure progress on global challenges.

One of those most important global challenges is achieving peace and stability in the Middle East, which can only be achieved with the engagement of the USA. There is now a unique international consensus on the terms of what has to be negotiated – spurred on by the election of Barack Obama as American President. Labour will continue to work with our European allies and the United States to push for a comprehensive solution in the Middle East based on a two-state solution with borders based on the line of 1967. We believe a viable Palestine with secure boundaries alongside a secure Israel, is the only solution. Labour also believes that full access must be given for humanitarian goods and supplies into Gaza

There is incessant support for our troops in Iraq and Afghanistan. Yet, what are the ultimate criteria against which their efforts will be judged?

Faced with an unpredictable security environment we are committed to taking the necessary action to protect our national security – that is why we are fighting to defeat terrorism in Afghanistan. Labour will not give up in Afghanistan because we know that a more stable and secure Afghanistan is essential for protecting Britain’s streets.

It remains a vital goal of British foreign policy that Iraqis are able to build a democratic, federal and peaceful country which will also be able to show the value of democratic institutions in the wider Middle East. I know that Iraqis themselves are keen to make their own contribution to rebuilding Iraq, and I am glad we can work together to this end.

The action we are taking to achieve a more peaceful and just world goes beyond our commitment to Afghanistan and Iraq. Whether through our continued campaign for an International Arms Trade Treaty, our work to promote democracy and respect for human rights and sustained pressure for a two state solution in the Middle East, Labour will keep working hard to help create a safer world.

What long-term effects do you think our involvement in Afghanistan and Iraq are likely to have on the relationship between Muslims in the UK and other parts of the world?

It was President Talabani, again, who rightly said of Iraq, “We are a potentially rich country but our legacy is a poor one. We value the ability of British business to unlock our resources through increased investment and by trading with us. Iraq is becoming increasingly open to commerce, which is a means of giving our people the better way of life that they seek and deserve.”

I strongly agree that it is in Britain’s interest to continue and develop our relationship with Iraqis and am moved when he adds that, “We are proud to be your friends and hope that you will always be our friends, working together for the common good of humanity.”

I have seen for myself how keen Iraqi political leaders and ordinary people are to catch up with the rest of the world. There is a thirst for connecting with academics, sports organisations, politicians and business people throughout the world, and the UK and the Iraqi governments are committed to building a new strategic relationship in the diplomatic, economic, cultural and political fields.

Iraqis – politicians and everyday citizens – have told me that they want the UK to play our part in helping Iraq form new relationships, and I am proud that the UK Government is actively helping and encouraging UK companies to play a substantial role in the reconstruction of Iraq’s essential infrastructure

Relations between Europe and the Islamic world have historically seen interchange, discovery and mutual contribution. Our central task for foreign policy is to create of arenas of politics, national and international, in which different values and ideas can be argued out, so marginalizing recourse to violence.

That is why Britain, with Embassies in 38 Muslim majority countries, maintains diplomatic engagement with countries with whom we have major disagreements on human rights, nuclear proliferation or conflict – like Iran, Sudan or Uzbekistan – but whose engagement is essential for the global challenges we have in common, such as climate change, Millennium Development Goals and the economic crisis. The one place where there is unanimous agreement that we need more political activism and more diplomatic engagement is in the pursuit of a 2-state solution in the Middle East.

We need shared effort to address shared grievances. For generations Britain has been a meeting place, where now two million Muslims from all around the world have made their lives. They join the coalition of the nation and are the greatest demonstration of progress being made through coalition based on consent. I hope that this is something we, together, can embrace and take further.

Support for the Labour party seem to be declining in the run up to this election- do you think British Foreign Policy is one of the reasons for this decline?

Since 1997 Labour has tripled Britain’s aid budget and we were the first country to sign up to the UN agreed target of 0.7% of national income to be spent on development assistance by 2013. We helped to secure an agreement to restore confidence, growth and jobs at the London G20 summit and took action to crack down on tax havens, agree regulation of credit agencies and hedge funds and introduce new rules on pay and bonuses. We also signed the European Social Chapter, which introduced guaranteed four weeks’ paid holiday; a right to parental leave; extended maternity leave and a new right to request flexible working.

These are significant achievements and we have transformed Britain’s relationship with countries around the world. We are not, however, resting on our laurels and have an exciting, ambitious foreign policy.

There is no greater responsibility than to commit our troops into action. That is why we take our responsibilities in Afghanistan and to our Armed Forces so seriously. A stable Afghanistan with a stable Pakistan means a safer Britain: if Afghanistan fell to the Taleban, Al Qaeda could regroup, and Pakistan’s stability and our national security would be threatened.

We also want to see a reformed European Union, focusing on climate change, economic competitiveness, energy security and continuing enlargement. Turkey’s future membership is a key test of Europe’s potential to become a bridge between religions and regions.

We will spend £8.5 billion over 8 years to help more children go to school; maintain our pledge to spend £6 billion on health between 2008 and 2015 and £1 billion through the Global Fund to support the fight against HIV/Aids, TB and Malaria. We will also continue to push for expanding the United Nations Security Council to better reflect global diversity.

The strength of Labour’s foreign policy record and the ambition of our international vision are important elements of our platform change and the choice at this election.

Politics is losing its appeal with the youth of today. As the youngest Foreign Secretary in 30 years do you think that it is time the Labour party had a younger more charismatic leader?

We have an excellent leader who has demonstrated the power of international leadership.

The global financial crisis has shown us the importance of working together with other countries to establish an approach to restore growth and jobs, while preserving long-term economic sustainability. The Labour Government’s role, expertly led by Gordon Brown, at the London G20 summit was widely recognised in helping to secure an agreement to restore confidence, growth and jobs. Gordon will ensure that Britain continues to be at the forefront of international discussions to ensure we avoid a repeat of the last global economic downturn.

Why should we vote Labour in the coming election?

Labour believes in combining our strengths and values with our alliances and networks to achieve our goals – across security, economic prosperity, development and climate change. The contrast with the Tory view could not be starker: they are stuck in the past, spurning alliances in Europe and helpless to defend our interests or secure the global change we need.

Labour believes Britain can extend our values and our interests and advance our ideas by being strong in the world and an integral part of the international conversation on conflict, security, economics and the future of our planet. The Tories’ policy of attack and retreat on Europe would fatally undermine British international influence. The Tories’ departure from the EPP – already damaging British business by removing British contacts in the largest European grouping – and isolation from the European mainstream is a preview of the international isolation they would experience if they ever got near power.

The real choice at the next election is advancing national interest or serving narrow dogma; international influence or international isolation; global leadership or petty infighting.

Labour is oriented toward the future; the Conservatives obsess about the past.

Labour seeks to use the EU to maximise Britain’s influence in the world; the Tories are happy to surrender our negotiating capital.

Labour is straight with the electorate; the Tories deceive with empty promises.