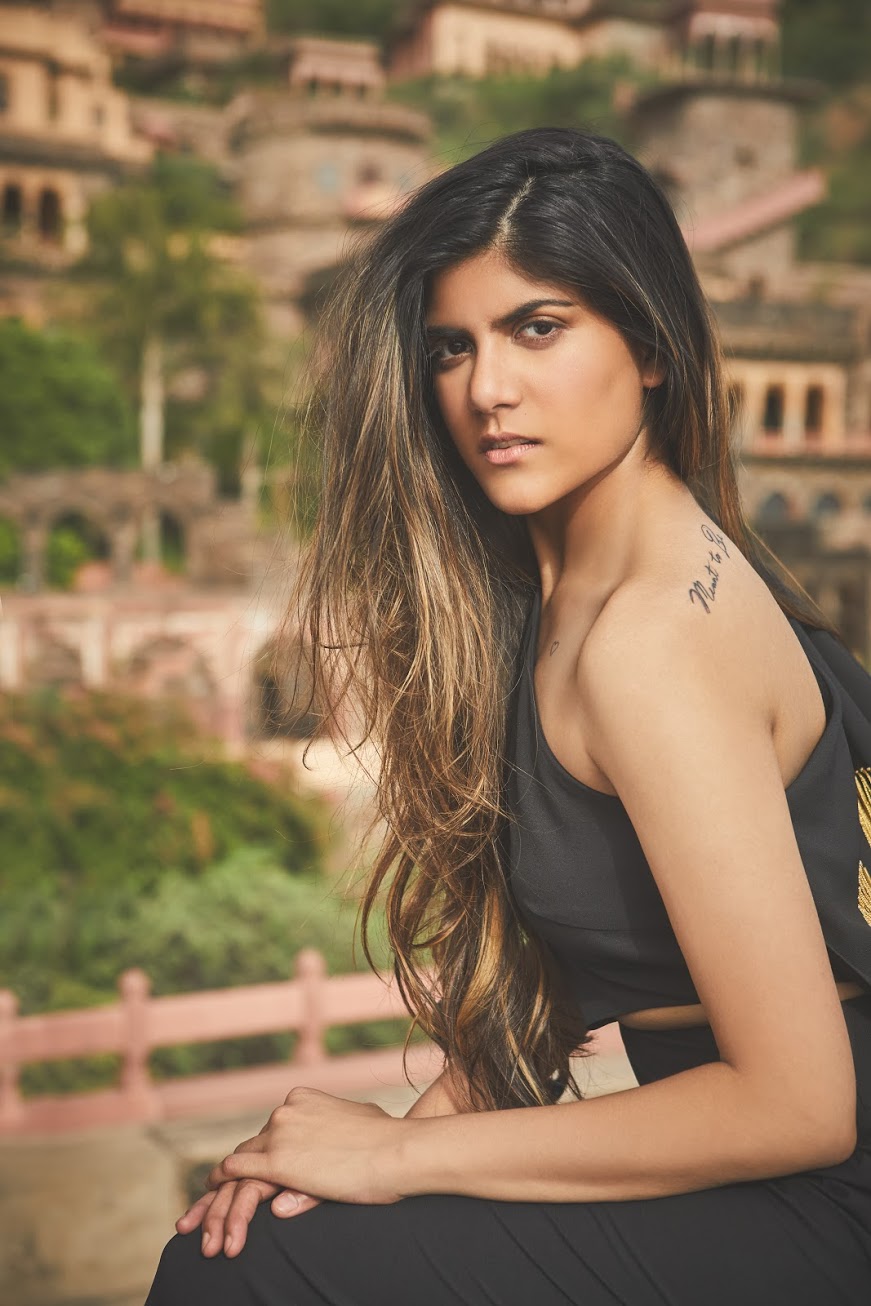 Since signing with Universal in 2016, Ananya has worked with Afrojack and Mood Melodies, shared the stage with Coldplay at Global Citizen, and gained over 21 million views on her first two singles on YouTube. Her latest single, Meant To Be went Platinum in India, which made her the first Indian artiste with an English single to achieve that feat there. She is recording between London, and LA at the moment working on an EP that is due a little later in the year. Her latest single Hold On, which launched on March 2nd, is an electro-pop song about unconventional love and the social pressures that go with it

Ananya is a very unique woman. Born and raised in Mumbai, she was educated at Oxford. At just 17 she launched Svatantra, a microfinance organization that helps empower rural women. Since then, she started Curocarte, a design and interiors ecommerce platform and Mpower, a mental health initiative that works towards dispelling the stigma associated with mental health illnesses and provides care in India where there has been very little to date. She established this after her own battles with anxiety when she was at University.

She has been named as one of Forbes Asia’s Women to Watch, amongst the ‘Top 50 Power women of 2016’ by Verve Magazine and Miss Vogue’s 28 Geniuses under 28, as well as being a recipient of the CNBC Young Business Women Award. She also has a huge social media following:

I am a musician, mental health campaigner and entrepreneur from Mumbai.

I just released my third single ‘Hold On.’ My previous song ‘Meant To Be’ went Platinum in India at the end of last year, which was an amazing feeling. I was only just getting used to hearing myself on the radio so it was totally surreal.

I run a mental health initiative called MPower Minds. We support individuals and the families of people with mental health issues, who are often ignored and discriminated against, by campaigning and providing amazing care services.

I have also set up two businesses: Svatantra, a microfinance business which supports disadvantaged women in rural India, and Curocarte, a digital retail platform for artisans around the globe fighting to keep their ancestral arts and crafts alive.

Hold On is a song about people who are going through a difficult relationship yet keeping the faith that things will turn out well. It was mainly inspired by stories of people who have held on to relationships which are rejected by those around them because of race, class or sexuality.

The video for Hold On gave me a chance to do some acting and explore a darker side of holding on to relationships. It portrays a universal experience that women, men, young and old, everyone can relate to – about the perils of trusting someone against your better judgement, about loss of innocence and learning hard lessons along the way.

The sound is similar to my last track Meant To Be. It sits in the electro-pop space, but because of the vocals it feels more like a ballad than “Meant to Be”.

When I write songs, they are always authentic and emotionally driven. I try to deliver a story or experience that is personal to me or that I have witnessed and to make it more universally relatable. The inspiration for this song came from a relationship of mine that wasn’t meant to be, in spite of the strength of feelings.

Authenticity is so important. Audiences can sense when music comes from the heart and it becomes so much more relatable. My musical heroes like Kurt Cobain, Eminem, Demi Lovato and Ed Sheeran have been so successful because of their honesty and vulnerability. It allows their music to resonate with people no matter where they are in the world.

I grew up in a very creative household, and have loved everything to do with music for as long as I can remember.

I learnt the Santoor when I was nine. Then, when I was a teenager, I taught myself the guitar and piano with the help of YouTube tutorials and joined a school band. We were not the best but we had lots of fun and it gave me my first exposure to performing.

When I was studying in the UK, I began to use singing and songwriting as a way to express difficult emotions. Whenever I could, I would travel from Oxford to London and perform at random gigs in cafes, bars and pubs around town. However small the audience, it would make me feel more calm and complete. I realised that music was what I wanted to devote myself to.

When I went back to India I was approached by Universal Music and it all kicked off from there.

Since then I have had some amazing experiences. From working with brilliant producers such as Jim Beanz and Mood Melodies and DJs like Afrojack, to recording in LA, Atlanta, London and Dubai. I also played at the Global Citizen Concert in Mumbai to 80,000, on the same stage as Coldplay! It has been a wonderful journey so far.

When I was 17, I founded my first company Svatantra (which means freedom in Hindi). It  provides loans to low-income, rural women to help them grow their businesses.

When you live in India, it is almost impossible not to be very conscious of the huge gap between rich and poor.  I wanted to develop a vehicle to address this, to give back to society but in a sustainable way that encouraged social progress and self-sufficiency. I believe it’s more valuable to empower someone to do something for themselves than to do it for them.

Svatantra fit the bill perfectly because it is a business with a heart. It’s not just about capital, but sociocultural development. I want to enable and empower women to make their presence felt in India’s economy and, more importantly, to be financially independent. We now have over 260,000 clients and are continuing to grow.

It has not always been easy. That being said, I really love everything that I do which makes  putting in the often long hours feel a lot less like ‘work’.

I used to sleep in my office and got near to burning-out before I realised how important it is to not neglect your own physical and mental health in pursit of your goals. Over the years, I have developed amazing teams on each of my projects which allows me to take more of a strategic role on the business side of things, rather than day-to-day operations. A good team is essential for success.

Today, I am so much better at taking time for myself – whether that means exercising (which is so important to keeping both your body and mind in shape) spending time with friends and family or, when I can, just taking the occasional day off to catch up on sleep and watch Netflix in bed!

I am travelling more and more with my music, but I get back to Mumbai whenever I can. India is a huge inspiration for my music and I find myself at my most creative when I am back home. I also miss my family a lot when I am away.

A couple of years ago I set up MPower Minds with my mother. It is an initiative which aims to stamp out the stigma around mental health in India. We run a number of campaigns, events and initiatives, last year for example we had a concert with Arjit Singh which over 20,000 people attended and  a cyclathon in Mumbai. We also have a world-class treatment centre.

When I was at university in England, I went through a difficult phase. Although everything seemed fine and I was doing really well academically, I was suffering from anxiety and panic attacks and I found it difficult to reach out for help.

When I returned to India, the stigma and lack of support for people with mental health issues became even more evident, I was shocked at the lack of awareness and initiatives to help people – which is why we started Mpower. It’s a cause that is very close to my heart. Eventually I got the support I needed, and quickly got back on my feet. But many people are not so lucky.

The stigma around mental health is a global issue, but it is particularly prevalent in India. I recently read that one student commits suicide every hour. Mental health is a topic that is rarely discussed and when it is, it is often trivialised. Globally, depression and suicide rates are on the rise and people are scared to reach out for help because they don’t want to be judged.

Greater investment is needed in providing proper care around the world, but the first challenge we face is the taboo which prevents us from even discussing it.

My mother – 100%. She is the most compassionate and strong person that I have ever known. Her devotion to making a positive difference, whether it be through her schools for underprivileged and special needs children or her work with charities is truly inspiring. She is also an amazing mom to me, my brother and sister and has always supported us in whatever we wanted to do. I am so delighted that I get to work with her now on MPower.