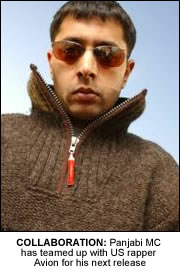 PUT your shades on and get ready to bounce to another explosive remix from the hugely popular Panjabi MC.
The man who bought us the monster hit “Mundian To Bach Ke”, took Bhangra to another level when hip hop icon Jay-Z featured on the track.
Now, he continues his mission to bring Bhangra into the mainstream with another killer collaboration for his latest offering, the “Panjaban Shades On Remix.”
This time he has hooked up with the talented Brooklyn-based rapper, Avion, a protégé of one of hip hop’s most revered acts, Eric B, to give his original track, “Panjaban” some urban treatment.
The original, taken from his most recent album “Indian Timing” features the lively Punjabi vocals of Manjeet Jelhi and is re-worked to combine big hip hop beats, a booming bassline and tight verses from rapper Avion.
The track also has two dance mixes and a bassline mix, which have already proven to be crowd-pleasing floor-fillers across Russia and Europe.
Talking about the track, Panjabi MC said: “It’s a big track on the club scene and I felt it needed a mainstream hook. I felt it had the potential to be bigger.  If a track is getting a good reaction it is worth remixing/collaborating. I heard Avion on a mixtape in US, found out he was working with Eric B and hooked up him from there. It’s a good follow up to Mundian To Bach Ke.”
The “Panjaban Shades On Remix” will be available on iTunes in February.