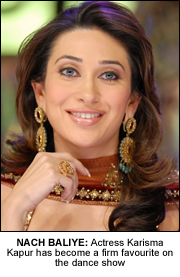 WHEN Bollywood actress Karisma Kapur agreed to be a judge on the hugely successful Star Plus reality dancing show Nach Baliye, it was hailed as a comeback. Only Karisma Kapur doesn’t label it as so. Seven years out of the limelight, Karisma is a changed woman. Motherhood has changed her perception on life but it hasn’t changed the woman adored by Bollywood fans before the days of Kareena and Bipasha. With Season 4 of Nach Baliye proving to be a ratings hit for Star Plus, Karisma spoke to us about the trials and tribulations of being a reality show judge…
You’re back after a sabbatical of almost seven years.
I have been working since I was 15. I have had a fair number of films, both commercial and otherwise as being critically acclaimed. But I decided that my daughter and my family come first. Why does everybody call it a comeback? When Julia Roberts and Meryl Streep in Hollywood decided to do one movie in five years, folks call it a break. I did take a break, but now I am back. It’s not that projects haven’t come my way but I just didn’t feel like getting into the groove of applying war paint and facing the lights. I wanted to enjoy my life. I am back but this is not my comeback.
Have you been given behavioural guidelines for the show?
It is nothing like that. It’s all about being fair, honest and judging correctly.
Who was your favourite ‘jodi’ in the last seasons of Nach Baliye?
Well I shouldn’t be taking names here but still to name one I think in all the seasons Sachin ji and his wife Supriya ji danced immensely well especially when you are pitted against youngsters. The way they performed and put in that effort at that age is really commendable. This time too we have some very interesting couples and we are all having fun watching them perform.
Who is your favourite from the current lot?
We can’t have favourites being the judges as everyone is equal. We just have to see how well they dance.
What do you have to say about the diversity in the audience voting and judges’ verdicts?
Honestly that can happen. Opinions differ from individual to individual so the diversity in their voting. We judges look at the technical aspect of it and audiences are looking from a different point of view. It also depends on the popularity of the couple. The couples have to be looked upon on technical grounds, their relationship and performance.
Haven’t you jumped on the reality bandwagon a bit too late as compared to the other actresses like Sonali Bendre and Raveena Tandon?
I do not believe in herd mentality. Yes, there are numerous shows mushrooming, but if a reality show had come to me earlier, I wouldn’t have considered it. The timing had to be right.
Do you watch TV?
I do but not that much. I do catch a little bit here and there. But, you have to agree that reality shows are much more exciting than fiction shows and I think Nach Baliye is my favourite. (Laughs)
What do you feel about the growth of TV today?
Today the gap between movies and TV has become very less. Many of my colleagues are doing shows on TV like Shahrukh, Salman and Akshay and I too have done TV in the past. There is not much difference between the two mediums and it’s just the avenue that differs. This is something that I have not done before and I am enjoying doing it. Also it doesn’t take too much of time. I don’t have to stay away from home, family and my daughter as it’s just once or twice a week. So I can give my undivided attention to the show. TV has given a career alternative to so many people. It’s amazing to see how TV has grown in India and like I said the gap has become so less. Now the biggest of stars are doing shows on TV and TV actors are also doing films and it is so pleasant to see the way they have integrated so well.
Who did you enjoy the most on TV amongst your colleagues?
All of them!
Honestly…
No, I am being honest. They are my colleagues and I have watched the programs because of them. I have done so many movies with all of them and have had great experiences working with them.
Would you like to host a show?
Oh my God! I have not given it a thought but let’s see when I am offered one.
What about working in a fiction?
I have done it once but it depends on the story and the script.
How has motherhood changed you?
I feel more mature and I am very happy with my life. Yes, there are ups and downs but then, who wants a life like a straight road. Give me a roller coaster ride any day. It is the best phase in my life and made me much more responsible as a person.
But neither the demands of marriage nor motherhood has adversely affected your looks?
I have been always like this and size zero is media hype. I am looking good because I am me and I am content with my life.
You last stint in Bollywood was in the year 2002 with Shakti. Didn’t you miss the arc lights?
In a way, yes, I did miss the lights. But then, I decided that if I don’t hang my boots and enjoy the phase I am in now, I would never ever enjoy my life. And now that I am back, I am open to new ideas and new shows, but again, it has to be something which touches a chord.
Nach Baliye broadcasts exclusively on STAR Plus on Friday, Saturday and Sunday at 9PM.