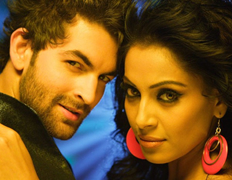 Directed by: Jehangir Surti
Cast: Neil Nitin Mukesh, Amrita Arora, Koena Mitra, Bipasha Basu.
Ray Acharya (Neil Nitin Mukesh) is a struggling photographer who has nothing going for him. But it is not long before he inherits a very special camera from his grandfather.
This camera changes his life in more ways he could ever imagine in his wildest dreams. It gradually changes Ray’s destiny.
As a result, his life becomes one big roller coaster ride taking him from rags to riches. He also finds love in Simi Chatterjee (Bipasha Basu), a strong minded disc jockey.
Everything goes well for the couple and they get married. Soon, they move to Japan for a promising fashion shoot in Tokyo. During their long car trip in the night they get involved in a tragic car accident, leading to the death of a young girl.
When they both regain consciousness, they find no trace of her body. Distraught by the incident, the couple reaches Tokyo to begin their assignment. Ray soon begins noticing strange white blurs in his photographs of the fashion shoot.
Simi believes the blurs are actually the spirit of the dead girl who they had killed in the car accident. She is now seeking revenge. Their beliefs become a reality when Ray shockingly sees his own death in one the photos.
He must now face the dark side to overcome the evil forces that awaits him. Can Ray change his fate? And who can he turn to for help?
Fast-paced, romantic musical thriller in the making, Aa Dekhen Zara is a great edge of the seat action packed movie delving into the unknown.
The film’s actual title has been derived from the all time classic song of the same name by playback singer, Kishore Kumar.
In Aa Dekhen Zara, Neil and Bipasha will not only sing the remix version of the original soundtrack but also perform a dance sequence for a promotional video. Neil Nitin Mukhesh, grandson of playback singer Mukesh and son of playback singer Nitin Mukesh stars in this latest movie.
His first Bollywood release, Johnny Gaddaar did not fare well at the UK box office but his acting talent was very much appreciated by audiences.
He is currently busy shooting for Yash Raj’s movie New York and Tera Kya Hoga Johnny alongside Soha Ali Khan. Aa Dekhen Zera will see a UK cinema release this March 2009.