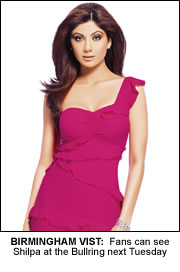 FANS of Bollywood actress Shilpa Shetty will be able to see the star in the flesh later this month when she opens a new fragrance shop in Birmingham.
The Celebrity Big Brother winner will be in the city for the Midland leg of her nationwide tour with her musical Miss Bollywood which will be showing at the Alexandra Theatre.
Shilpa who launched her own fragrance S2 earlier this year, will sign bottles of her fragrance and chat with fans for the opening of The Fragrance Shop in the Bullring next Tuesday.
One lucky shopper will also get the opportunity to get their hands on a pair of VIP tickets to her show at the Alex.
Shilpa will be at the opening of The Fragrance Store in the Bullring on Tuesday 20 November at 4.30pm.