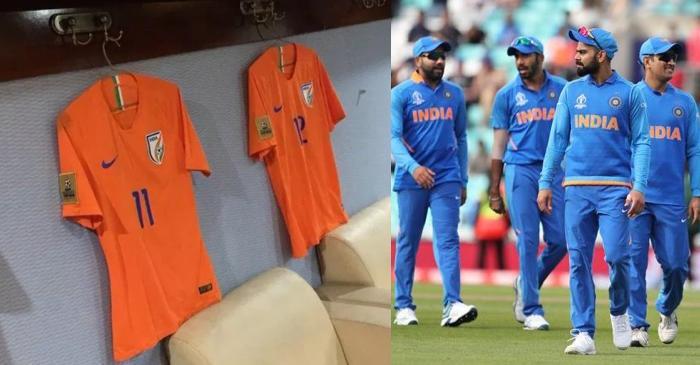 In this year’s ICC World Cup 2019, the Indian team will be rocking a new orange jersey which has been inspired by the Indian football team kit.

As per the media reports, the BCCI marketing team is brushing up the final design and the jersey unveiling will be done very soon. Also, the new orange jersey of the Men in Blue is inspired from the Indian football team kit. The Indian footballers so off the new orange kit during their away matches and now similar concept will be used in the ongoing cricket World Cup.

International Cricket Council (ICC) had announced that all participating nations will be required to provide two kit jerseys of different colours. Barring host England, who enjoy a preference in choice of kit colour, all nine teams will be apprised about the kit colour they will wear in their respective away games.

“For televised ICC events all participating teams will be required to provide for two different coloured kits, except for the host country who has a preference in the choice of colour and may, if it chooses to do so, provide only one coloured kit to be worn in all matches throughout the event. In advance of the event the teams will be notified which coloured kit will be worn in each match,” the ICC had said in a release.

While England have the privilege to wear the blue jersey throughout the tournament, India would have to sport the orange jersey against Eoin Morgan’s side on June 30 at Edgbaston. Kohli and his men can also be seen in similar colour against Afghanistan.

Team India have been famously known for donning the blue jersey across all white-ball formats of the game. In the 12th edition of the cricket’s biggest extravaganza, however, they will ditch the blue shade with orange in away games.

“The BCCI marketing team is still working on the design and the jersey will be unveiled very soon,” a BCCI source said.

Autism in the Asian Community

Getting serious with Manni Tamber

Samira Ali All Set to Star In bPositive