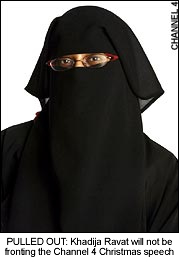 A BRITISH Muslim woman who had been chosen to deliver a telecast Christmas day speech on the veil has pulled out of the project.
Khadija Ravat, who lives and works in a school in Leicester, was slated to deliver the speech as part of Channel 4’s alternative Christmas showpiece which is broadcast at the same time as the Queen’s traditional speech.
But the Zimbabwean-born teacher decided against the move blaming unexpected publicity, the Daily Telegraph has reported.
In a statement released through the television channel, she said: “My initial thoughts about the programme were that it would be a fantastic opportunity to do something positive and to convey a warm message for everyone to share.
“However, after careful consideration, I have decided not to appear on the programme.
“I have no doubt that Channel 4 will continue with its inquiring and sensitive approach on issues relating to Muslims in Britain.”
Although refusing to elaborate on her surprise decision, the paper quoted the head of the Muslim school where Mrs Ravat works who said she faced criticism from inside and outside her community.
Ibrahim Hewitt, 50, head of the al-Aqsa Primary School, told the Daily Telegraph Mrs Ravat had received criticism from some within the Muslim community as well as non-Muslims.
“Some people think she is trying to upstage the Queen, which is certainly not the case. But I think she feels it would rub people up the wrong way,” he said.
In an interview with the Daily Mirror just days after Channel 4 revealed she would be fronting the speech, Mrs Ravat said she was eager to put out a “positive message” in the speech.
“Wherever I look, there are different colours, different people”, she said.
“Sometimes we disagree but we respect each other. That is why I will use the six minutes to put over a really positive message. I want to build bridges,” she added.
A spokesperson from the channel said they were still committed in delivering a speech by a veiled Muslim woman.
Related Articles:
Muslim Woman in alternative Channel 4 Christmas messages