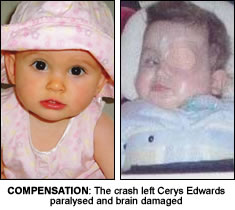 A YOUNG girl left brain damaged and paralysed after a crash caused by a millionaires’ son has been awarded an interim payment of £800,000.
Cerys Edwards suffered horrific injuries after the car she was travelling in with her parents was struck by speeding motorist Antonio Singh Boparan.
He was jailed last month for 21 months after being convicted of dangerous driving.
During the trial, Birmingham Crown Court was told he sped dangerously down Streetly Lane, Sutton Coldfield when he reached a speed of 70mph before hitting Gareth and Tracey Edwards’ oncoming jeep.
Young Cerys was left paralysed and brain damaged by the crash and has needed 24-hr care ever since.
Her parents Gareth and Tracey Edwards were paid by insurers for Boparan at Birmingham High Court.
The money will help pay for a special house which will meet the requirements for Cerys’ care.
Since the crash she has been looked after at a special Children’s trust in Surrey – 150 miles away from her family.
The Edwards have now launched an online petition calling for tougher sentences for dangerous driving.
www.cerysedwards.com
Related Articles
Millionaire’s son guilty of dangerous driving