The Great Britain and Northern Ireland team of CJ Ujah, Adam Gemili, Danny Talbot and Nethaneel Mitchell-Blake held off the challenge of the United States of America to take the gold medal.

The Americans were favourites on a cold evening at the London Stadium but all eyes were on Usain Bolt. The 30-year-old was set to feature in his final race in the relay. Earlier in the Championships, Bolt took bronze in the 100m final and murmurs of the great man displaying signs of mortality emerged from the shadows.

Nevertheless, he stood at the stop of the last leg confident pre-race with his usual array of gestures exciting the crowd, and Great Britain’s Mitchell-Blake, who joined him on the anchor leg, will have felt his presence.

CJ Ujah gave the hosts a flying start before passing the baton to Gemili, who surged through his leg establishing the team as the leaders. Justin Gatlin ran strong and the US breathed on the shoulders of Danny Talbot, who was the oldest on the British team at 26-years-old. 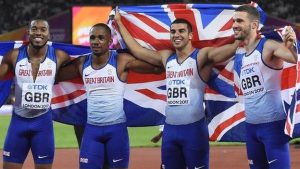 Talbot held his own and maintained the position and made a smooth pass of the baton to Mitchell-Blake.

Meanwhile, the Jamaicans sat in third place as the eight-time Olympic gold medallist took the baton but the run was short-lived. With around 60 metres to go, Bolt slowed to a hobble, his hand placed on his hamstring and a look of anguish swept across his face.

Christian Coleman looked to overtake Mitchell-Blake and the two were in a battle for first place. The 23-year-old Brit managed to hold on and send the crowd into raptures as they realized the boys had won the UK’s first every 4x100m gold.

The crowd was caught in two minds, however, as they watched Bolt’s teammates gather around the 100m and 200m world-record holder who lay on the floor.

A sad finish to a shining career which many have considered to be the saviour of the sport of sprinting. Bolt eventually rose and rejected the wheelchair which was brought on for him, and the crowd showed their appreciation for the Jamaican. A contrast to his normal boisterous self, Bolt waved to the crowd before staggering off the track.

Of the Great British team’s triumph Gemili said, “We are world champs. To run it with Danny Talbot after such disappointment in London 2012, it is so special to come back. Thank you to everyone. It’s crazy. Honestly a dream and a reality tonight. Wow.”

Be Clear on Cancer campaign

Ramadan Glaucoma Health Campaign Launched Amid Fears That Patients Are Putting their Eyesight at...