Home Interviews Salman Khan ‘The older you grow, the better you grow as an... 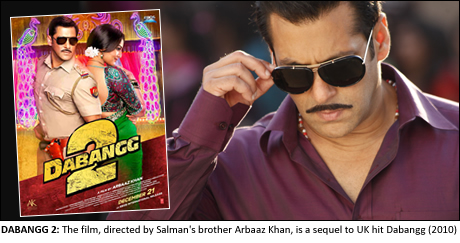 SALMAN Khan is back as Chulbul Pandey in UK cinemas with Dabangg 2, an Eros International release.
Dabangg 2, directed by Salman’s brother Arbaaz Khan, is a sequel to UK hit Dabangg (2010).
In this much-awaited Christmas release, Salman will once again be seen romancing Sonakshi Sinha, who made her debut in Bollywood films with Khan two years ago with Dabangg.
The 46-year-old actor opens up about the film and much more in this interview with Sunny Malik
How would you describe your character Chulbul Paney?
Chulbul, as a character, can do anything and get away with blue murder. In this genre, you can do anything as an actor. Even in Ready, I was Prem but then a little bit ‘haraami’ too. My character takes off in Dabangg 2 from where Dabangg ended.
Many of your films like Ready, Bodyguard, Dabangg and Ek Tha Tiger have crossed 100 cr.  How do you feel now that Dabangg 2 is also all set to join the league?
My filmi funda is very simple. Every film will not necessarily cross the 100 cr. league just because I am in it. If a film is bad, it will definitely not cross the 100 cr, plus mark. It is not easy but it is achievable now, if a film is good. It was difficult to believe that a film can gross 100 cr. plus two years back but now it is quite possible.

What is your take on success?
I have my own pulse. I will succeed only if I believe that my own pulse is that of the audiences. As Salman Khan, I have become a megalomaniac. If I can deliver as Chulbul Pandey, it is fine but it is bad if I do my role as Salman Khan.

How was your brother Arbaaz Khan as a director in Dabangg 2?
Arbaaz is an industry boy from a film family. There was a time when he used to assist on the sets. Arbaaz is a sensible boy and knows the rips of direction very well and is a fantastic story teller. What I like best about Arbaaz is that we have a comfortable zone and he sets out to make the film with his own hard earned money and not some on else’s. If he did not like the way a particular scene was shot for Dabangg 2, he used to insist on shooting it again.

What is the message that will be driven home through Dabangg 2?
The message is that very few married couples continue to romance even after their marriage. The story is set in Kanpur now where Chulbul and his wife migrate. In every which way, Dabangg 2 is a real sequel and we are not just cashing on the brand value that Dabangg had generated.

How is Sonakshi in the sequel?
There has been absolutely no difference whatsoever in Sonakshi. She is a very talented girl. The film was on the floors within a year after Dabangg was released. What I liked about her is the fact that though she was game to put on a little weight for the sequel because she plays a pregnant wife in it, she has managed to knock off her weight now.
You seem to like action a lot
To keep myself fit, I want to do action. I would love to do a film of action comes in it with a baggage of emotion. Whether it is an action film or an emotional film, the introductory fight has to be interesting enough to hold you as a viewer. The older you grow, the better you grow as an actor. If action is over, romance is over. I am glad that kids today call me Salman or Salman Khan and not Salman Uncle. The younger lot of actors today is a superb lot because they come prepared on the sets.

What is next after Dabangg 2 for you?
I will start work on Sohail’s next, Sajid Nadiadwala’s Kick (to be shot in London) and last but not the least Sooraj Barjatya’s next film.