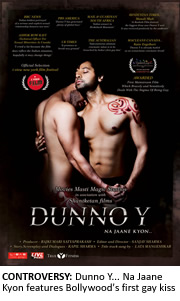 FOLLOWING screenings at international film festivals in the US, UK and Australia, Dunno Y… Na Jaane Kyon had beenA combination of censor board delays and protests against the Sanjay Sharma-directed production however, pushed back the film until November 12.
Kapil Sharma, who opposite Yuvraaj Parahar plays the lead role in the first Indian movie to show a gay screen kiss, shares his thoughts on how he is feeling 48 hours before the first day, first show of his debut.
“The feeling before the release is mixed. I am excited, nervous, anxious and happy. The film has faced many controversies, from the censors taking three months, to getting distributors for an unconventional subject.”
The star spoke of the pre-release controversy surrounding the film ad threats made against him: “Recently I received threatening mails, in which it was written that this film would corrupt society and that homosexuality is part of western culture. They said that we would be damaging society if it releases, and the consequences would be bad for us.
“Political party workers also came down to my building to protest, until the police took good care of the situation. I am scared that they may create further scene on release of the film, but let us hope for the best.”
Despite the difficulties the film has faced in India, Kapil is proud of the recognition DYNJK has received even before its box office release. “The film has won three awards so far. The viewers’ choice award at Sydney Trikone Film Festival, Best Sensitive film at Kashish International queer film festival of Mumbai, and Yuvraaj and I got an award for our work from the Deputy Chief Minister Chhagan Bhujbal,” the debut actor revealed.
The film, described as Bollywood’s Brokeback Mountain also features veteran actors Zeenat Aman, Helen and Kabir Bedi, alongside rising stars Hazel and Maradona Rebello.