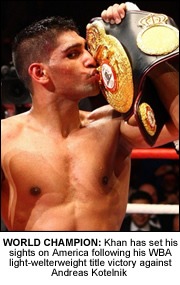 AMIR Khan and Frank Warren will consider the fighter’s next move this week following his WBA light-welterweight title victory against Andreas Kotelnik on Saturday night.

Khan is keen to make his debut in the USA following his one-sided points victory over the Ukrainian, while any one of a dozens fights could be made off the back of the win.
“We want to fight big names, fight in America,” said Khan. “I thank Frank Warren for getting this fight in Britain and now I think it is time to go to America and fight over there.

“Frank is a great promoter and he got me this fight.

“Next I want to be fighting the best out there. There are some big fights there and that’s what we want to do.”

Warren added: “Going to the States is definitely an option, but over the next couple of weeks we’ve got to sit down and decide what to do.”

Khan has repeatedly been linked to a fight with Ricky Hatton, who has previously held the WBA title, and, until he lost to Manny Pacquiao, was regarded as the world’s best 140 pounder.

The Mancunian could be in the frame as a potential future opponent, although Khan was coy on the subject and Warren would prefer it if Hatton retired.

“Everyone will have a view on it but from my point of view Ricky shouldn’t be fighting – it’s not good for boxing and it’s not good for him more importantly,” said Warren. “He’s just been in hospital for whatever that was.

“Financially it’s a fight Amir would do really well out of but Ricky would get stopped again. I don’t think he should fight. If he wants it I’m sure it could happen but for his health he should definitely retire.

“You know what happens? The fight happens but later down the road God forbid anything happens to Ricky then people blame boxing, instead of greed.

“If he wants to put himself in there then that’s his decision – he’s not a baby, he’s 30 odd years of age – but sometimes fighters go on too long and it’s not good for them. Bad things can happen.”

While Roach insisted that he would take the fight “in a heartbeat”, Khan said: “I’ll leave the decision with the team. At the moment I’m going to enjoy what I’ve done tonight.

“I’m a fan of Ricky Hatton and I’d like him to support me on the way to achieving what he’s achieved.

“Boxing is a game where you have to face fighters and that would be a huge fight that British people would want to see. We’ll see what happens and like I say I’ll leave it with Frank and Freddie and if they think it’s the right move for me to make then I’ll do it.”

Other possible opponents include WBA interim champion Marcos Maidana, while Erik Morales and Juan Manuel Marquez have also been mentioned.

For now though, Khan will bask in the glory of what he has achieved, and admits he will have to reset his ambitions having become a world champion.

“I’m going to have a few weeks off and then set new goals,” said the 22-year-old.

“Now I’ve won the title and proved myself, we’ll get people knocking on our door saying they want to fight me.

“There are some big fights there in the future. I want to fight the likes of Marquez and those guys because I think my style will work against theirs. We’ll give it a few weeks and see how we go.”

Fashion at the Eiffel

Birthday of the Prophet: Mawlid al-Nabi

Watch out for Argentina