THE SIMPLYHEALTH Great Birmingham 10k will feature a stellar elite line-up to mark the city’s bid to host the 2022 Commonwealth Games.

The 10k, now in its third year, takes place on Sunday, 30 April, and will be televised on Channel 5 for the first time.

Event organisers The Great Run Company have assembled a top-quality field with runners recruited from Commonwealth nations ahead of the event which takes place in the city centre.

In the women’s race, England’s Gemma Steel will face stiff opposition from the Kenyan duo of Violah Jepchumba and Lucy Cheruiyot in a mainly domestic-based field. 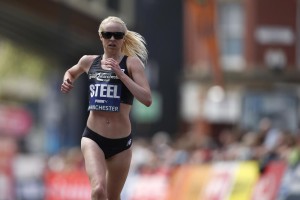 While the Simplyhealth Great Birmingham 10k is an established event, with 8,000 runners taking part this year, it will be uncharted territory on a new course, which starts on Jennens Road and finishes at the new location of Millennium Point on Curzon Street.

A course record will therefore be up for grabs in front of the television cameras, and Toroitich will be the man to beat in the men’s race.

Kiwi Wallis is in fine form after taking the victory in last weekend’s 10-mile race in Edinburgh, where he repeated his 2016 win in the Scottish capital. The 29-year-old goes into Sunday’s race with hopes of making selection for the New Zealand team at 2018’s Commonwealth Games on the Gold Coast.

Kenyan Frankline Keitany is the only other non-domestic name on the start list, with a raft of English runners all planning to give the frontrunners a difficult morning.

In the women’s race, Steel – the third-best British female in history over the 10,000m – will be seeking to maintain a solid start to 2017 which saw her victorious in the Great Ireland Run three weeks ago, but will be given a run for her money from Jepchumba, the fifth-fastest woman in the world of all time over the half-marathon distance.

Lucy Cheruiyot will be one to watch, the Kenyan 19-year-old impressing in last year’s African Junior XC Championships, while Katrina Wootton’s best of 31.47 over 10k sees her placed second in the European rankings.

Double Commonwealth champion Liz McColgan-Nuttall will be honorary captain of Scotland’s team, and will be taking on the 10km distance on Sunday.

The action is televised live on Channel 5, with coverage from 10am-12noon.