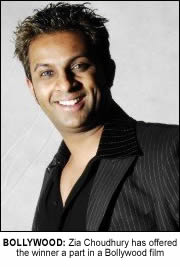 Later this month fifteen British beauties will do battle to be crowned Miss Bollywood UK.
The first event of its kind, the winner will be whisked off to India to live the life of a Bollywood celebrity. A one year modelling contract, promotional events and the promise of appearing in a Bollywood film alongside one of the industry’s leading men is, for some, a once in a lifetime opportunity.
The man who promises to make the dream a reality is Zia Choudhury, the brains behind Miss Bollywood UK.
The Leicester-based model and actor came up with the idea back in the summer of 2006. Three years later and he is finalising the star-studded event which will be held in Birmingham at the end of August.
“It’s so exciting to know that the event is just around the corner”, admits Zia. “I know how much work, commitment and dedication has gone into planning Miss Bollywood UK so it’s exhilarating to know we’re nearly there.”
Such was the demand to be crowned Miss Bollywood UK, it took months for Zia and his team to whittle down hundreds of applications to the final fifteen.
So what’s the appeal for the lucky final group? In one word – Bollywood.
The Indian film industry eclipses Hollywood in the number of feature length films produced and released each year.
While not all become instant hits, the glamour and glitz that comes with Bollywood is hard to resist.
“The appeal in Bollywood is the song and dance, the glamour, the people; it is after all the largest film industry in the world,” says Zia.
“Suddenly we’ve got this cross over between Hollywood and Bollywood which adds to the authenticity of the Indian film industry. It’s an exciting time to be part of Bollywood.”
One British woman who is proving the step from beauty queen to Bollywood princess is possible is Lisa Lazarus.
The Welsh beauty, who scooped the Miss Universe UK title last year, has suddenly found herself on screen with Salman Khan in the soon-to-be-released period drama Veer.
The man who helped secure that role was Zia who acts as Lisa’s Bollywood manager.
His own involvement in the industry dates back to 2001 when he appeared as an extra in the star-studded film Kabhi Khushi Kabhie Gham. Soon after, he landed himself a number of roles in subsequent Bollywood films.
Zia admits he’ll use his own experience of the industry to get the winner prepped ahead of her Bollywood encounter.
“The winner will get all the help and support I can offer to make sure they get every chance to make a name for themselves in Bollywood. It will be an exciting experience for them and one that they will not forget.”
With the final touches and last minute celebrities being lined up for next month’s show, Zia admits he already has his sights set on next years event and the possibility of taking the format abroad.
But before Zia has the chance to dream his dream, fifteen girls from England sit at home dreaming of when they’ll get the chance to become the UK’s latest Bollywood star. Roll on August 29th.