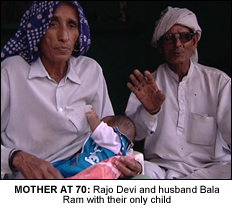 LOOKING at the picture to your right, you’d be hard pressed to find anything out of the ordinary. An elderly woman holds a young baby, while her husband gestures to the camera. The question you have to ask yourself is how are the adults related to the young child.
Pictured is Rajo Devi, 70 and her husband Bala Ram, 72. The child is in fact Rajo Devi’s one and only child, born at the National Fertility Centre in Hisar, India in November 2008 – making Rajo the world’s oldest first time mum at the age of 70.
It’s a picture that would have once sent shockwaves across the world. Today, the number of women who have chosen to make the most of fertility technology’s rapid progress is rising.
The uncanny fascination surrounding older mothers has stirred up a debate that questions the use of science and its collision with social responsibility.
On one hand some argue of the “right” of a woman to control her own fertility destiny, while others question the morality of leaving young children orphaned before they even get the chance to get to know their parents.
To say it’s the mother of all rows is a slight understatement.
Earlier this month the row resurfaced when Maria del Carmen Bousada de Lara, a mother to twins at 69, died from cancer.
Predictably her death sparked a wave of moral outrage. While Maria herself claimed not to have regretted her late-motherhood ambition, others have used her death as an example of all that is wrong with such actions.
But what of those mothers that are rejoicing in their new found motherhood?
BAFTA nominated documentary filmmaker Amanda Blue brings their stories to life in the Cutting Edge programme The World’s Oldest Mums set to be screened on Channel 4 tomorrow night.
She travels the world to meet four women who – long after the menopause prevented them from getting pregnant the old-fashioned way – have chosen to use fertility technology to have babies.
For Rajo and husband Bala, the possibility of becoming parents was all too tempting.
Childless after 50 years of marriage, she and her husband spent most of their life savings on IVF at the National Fertility Centre that claims to have seen up to 50 women in the over-50 age category this year.
Despite being the second country in the world to produce a test tube baby, India has yet to create a single law around fertility treatment.
But back in Rajo’s village the celebration of her long-awaited baby, along with the strength of the family network, make their decision to become parents more difficult to criticise than might be expected.
“After the birth everyone celebrated,” Rajo says. “People came from everywhere to see the child. People respected me a lot. It was because I’d given birth at such an old age. This was all God’s work.”

For Rajo’s neighbour, the child’s family extends to the entire village so questions of Rajo’s age are dismissed.
“The girl has bought light into their house,” the neighbour explains. “They are happy now and their hearts have grown. Our Indian society is such that the whole community, the entire neighbourhood will take care of the child. Who cares about her (Rajo’s) age?”

For filmmaker Amanda Blue, she questions why the mothers’ choices are met with such disgust and aversion.
“My aim was to explore the morality and ethics of elderly motherhood, to get beyond the kneejerk reaction of the media, to meet the women who’ve pushed against the boundaries set by nature and society to have children in old age,” she explained.
“Who were these women and who were the children, how did they fare? What drives these women to have babies when they could be collecting their pensions and why do they so disgust us, when men of a similar vintage are getting a firm pat on the back for their lasting virility?

“This myriad of questions is explored through each of the woman in the film; often they don’t have a straightforward answer, but I couldn’t help wondering if there was something sexist and ageist converging around these women’s bodies and their choices, or was the outcry justified on behalf of the children? It seemed to me a hugely interesting moral journey to go on.”
The World’s Oldest Mums
Thursday 23 July, 9PM, Channel 4