Chelsea FC hand out the medals in the ultimate footballing prize 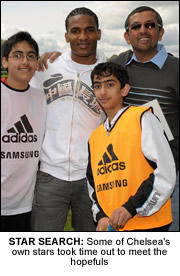 THREE days of a ground-breaking new initiative by Chelsea football club drew to a close with three young Asian players joining the club this summer for trials at the clubs Academy.
Search for an Asian Soccer Star was designed to give a much needed kick-start to greater Asian representation within the sport by uncovering potential future professional footballers from a so far under-represented community.
Launched by Chief Executive Peter Kenyon, over 350 young players battled it out over three days of tests, matches and competitions and were joined by a host of Chelsea first team stars keen to lend their support including Nicolas Anelka, Petr Cech, Florent Malouda, Salomon Kalou and Deco.
The eventual three winners, Jhai Singh Dhillon from Hitchin who won the Under 14s category, Jordan Sadhu from Ilford in the Under 13s, and London’s Aameer Kstantin Murphy who won the Under 12s competition, will return to the club in August in a bid to land a coveted place at the Chelsea Academy.
Striker Kalou, who was on hand to meet the finalists, praised the club for their stance in trying to bring Asian kids into the game.
“It’s a good initiative and I think it reflects how open Chelsea are. This has shown just how much these kids love to get involved in football and if Chelsea can be the first club to start this sort of project, then it’s a great opportunity to other teams to follow suit.” 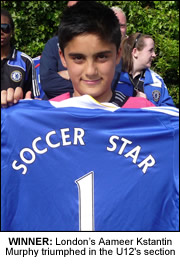 “This reminds me when I was a kid, going through these kinds of tests. It’s good opportunity for them to show they can be at Chelsea and become professional players. I remember when I had football trials when I was younger and I was happy and really excited. It’s not every day you have this sort of opportunity and I hope the ones who are chosen will have a good career and become great players.”
A change is already beginning according to Jas Jassal, who brought seven youngsters he works with to Cobham over the weekend, including his own son Amandeep for the Under 14s trials.
Jassal is much-involved in running Concorde FC Juniors, providing grassroots football for kids from all backgrounds in west London.
“Ten years ago when I was playing I couldn’t see an Asian football star coming through, but now in the next 10 years I can,” he said.
“Chelsea is the first big club to promote grassroots football among the Asian community. It is important to find that talent and nurture it. This has been a great three days for the boys and for us to network.”
Search for an Asian Star will return next year but Chelsea’s work encouraging Asian participation will continue throughout the summer as coaches and staff embark on a 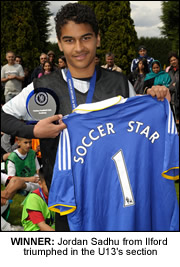 community tour providing free coaching for schools and Asian community groups in London and the South East. The club will also be hosting the Community Cup Final at Stamford Bridge in June.

Sky’s the Limit for Jasmine Dotiwala

Render Relationships Fun Again. That is what we-all desire, and that is what XO does.

Many Fish Evaluation August 2021 (Good Web Site For Fits Or Filled Up With Scammers?)

My personal boyfriend and that I came across while we had been both at...