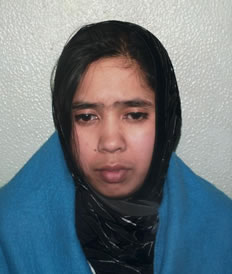 A woman who murdered her wealthy lover after he refused to end their affair has been jailed for life.
Joygun Nessa (pictured right), 27, of Bow, east London, enlisted the help of her 18-year-old brother Azhor Khan , who was also sentenced to life, to help kill her lover of seven years Shah Afruj Ali.
Mr Ali’s badly charred body was found in woodland in Essex in February last year. His car had also been set alight. The father-of-three was last seen alive by his wife on February 12, 2005.
Nessa was told she must serve a minimum of 13 years. Her brother was told he would have to serve a minimum of 11 years.
The Old Bailey was told Nessa, a divorced mother-of-one, was desperate to end her affair with Mr Ali after finding another man.  The two had enjoyed an affair for seven years, in which the court was told, Mr Ali had spent in excess of £27,000 on Nessa.
Mr Ali had told a friend his relationship with Nessa was “pure infatuation”.


On the day of the murder Nessa stopped off to buy petrol before taking Mr Ali to Epping Forest where he was attacked with a dagger.  His body was set alight before Nessa and Khan then drove off in Mr Ali’s car, with other unidentified men, and later set it alight.

Khan’s friend, Rayhan Raza, 19, of Hackney, east London, was found guilty of conspiracy to cause bodily harm in August. He will be sentenced at a later date.
Detective Paul HARWOOD, from the Specialist Crime Directorate, said: “My team and I would like to thank the family of My Shah Afruj ALI for the continual support they have shown throughout this long investigation. This murder was planned and carried out in a horrific manner by Joygun Nessa and her brother Azhor Khan who lured Mr Ali to Epping Forest.
“Our thoughts are with Mr Ali’s wife and three young children at this time, I hope they can now have some closure and be able to move on with their lives. The MPS would also like to thank Tower Hamlets ‘Council of Mosques’ for their support and assistance, enabling police to reach out to the Bangladeshi community for assistance with the investigation.”