‘This is the best news that I could have received,’ says Khan 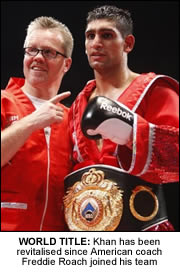 AMIR Khan will fight for a world title in June after boxing promoter Frank Warren set up a mouth watering clash with WBA World Champion Andreas Kotelnik.
The 22-year-old Bolton boxer beat Mexican legend Marco Antonio Barrera last month and has not been shy in pushing Warren to set up a world title bout.
Khan will step up a division to light-welterweight in his bid to conquer his world title ambitions.
He has campaigned predominantly in the lightweight division, winning the Commonwealth, WBO and WBA Intercontinental titles, but he moved up to 140lbs for an IBF Intercontinental title fight in December 2006 to beat Rachid Drilzane.
But there will be work to do – Ukraine-born Kotelnik has never been stopped in 34 fights.
But promoter Frank Warren said the team were confident the challenge would be met by a revitalised Khan.
“This is the moment that Amir has been waiting for and I’m delighted to deliver him the opportunity” Warren said. “Amir put in a sensational performance against a three time world champion and future Hall of Famer in Barrera in only his 21st fight and now he has to produce the same form against Kotelnik who is a good hard fighter.”

Kotelnik, who is based in Germany, won the WBA crown last year when he beat Welshman Gavin Rees. Since defeating Rees he has made two successful title defences against Norio Kimura and Marcos Rene Maidana both on points.
A delighted Khan said his only thoughts now were on beating Kotelnik and becoming a world champion.
“This is the best news that I could have received,” said Khan.
“To fight for the world title in only my 22nd fight and at the age of just 22 is fantastic. Frank has done a great job getting the world title fight for me in Britain and now I have to go out and win it.”

“I’ve seen Kotelnik a few times and I’ve always been impressed by him but once my trainer Freddie Roach works out the game plan to beat him it’s my job to execute it on the night as I did effectively against Barrera.”

50 most useful Tinder grab contours.For instance, among their photos shows them in Paris.

among these spot. Problems income subscribe to mortgage with below-average financing sa, the maximum

Brent & Emi: An Internet Dating Triumph. Just exactly exactly How did the...