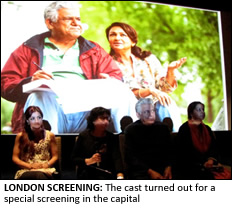 BOLLYWOOD actors Sharmila Tagore, Soha Ali Khan and Om Puri flew into the UK for the release of Life Goes On at a special screening in London.
The film, a multi-cultural adaptation of Shakespeare’s ‘King Lear’, set in a contemporary British Asian context, is helmed by first time director Sangeeta Datta.
Star of the production, Sharmila Tagore, compared the filmmaking process in India to working on an international project: “The photography of the film is so real and so correct and what I really liked about the film is the quality of the sound and the music,” she said.
“It is so real, and had been made in very real circumstances. In Bombay perhaps that balance may have gone.”
The veteran actress added: “I enjoyed working in this film and I am very grateful for Sangeeta for giving me the opportunity, and to work with Om Puri and Soha and all these very talented young people.
Soha, who had earlier studied in the UK, spoke about coming back to work on a film in London, and on the experience of sharing screen space with her mother.
“I wanted to share some filmography with her. In India everyone always says ‘When are we going to see you and Sharmila-ji on screen, or you and your brother.’ The script was written in such a way that I thought a real-life mother and daughter duo would add to the film.”
The Rang De Basanti star added: “I’m really happy with the film and the end result, and it will always be memorable to me and close to my heart for obvious reasons.”
Om Puri, who can be currently seen in Diwali release Action Replayy, praised the message of the film.
“To me, the film projects a multi-cultural society, or a collage of multi-culturalism. Unless we are able to appreciate or have an understanding of each other’s culture there will always be friction, so for me this film is a lesson in tolerance,” said the 60-year-old actor.