Pakistani popstar on why peace is the way forward 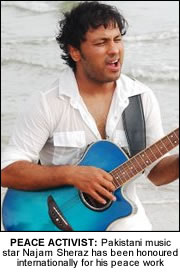 NAJAM Sheraz is one of Pakistan’s biggest international singers. Selling thousands of albums over a career that has spanned a phenomenal ten albums isn’t enough for this young artist. Najam is a peace activist driven by the desire to see a better world for all – a passion that is reflected in his music. A goodwill representative for Pakistan on the international stage he boasts two U.S. Congressional awards for his work towards world peace and his moving peace anthem Only Love was the official Beijing Olympic song for the Torch Relay Ceremony in Islamabad.
Later this month Najam will perform at the annual Global Peace & Unity event in London – his fourth appearance at the event in as many years.
Zakia Yousaf caught up with Najam to find out what it is about global peace that makes him so passionate…
Najam, your forthcoming appearance at the Global Peace and Unity event will be your fourth now – what is it about the event that interests you?
It’s a global peace event which has been my mission ever since ”Na Tera Khuda Koi Aur Hae” came out. This platform does not support any school of thought or sect and promotes unity. For me it has been a great opportunity to connect with so many wonderful people. I seek inspiration and motivation from this event.
The event attempts to build bridges between people irrespective of religion and race – do you think it is successful in its aim?
Yes it is to a great extent. Thousands of people get out of their homes get together at Excel peacefully like a family. It is a great demonstration for all other communities that Islam is about peace in everyway . Artistes and scholars from different countries come and motivate the spirit to live in peace. You see a community can only contribute to a global peace when they are united. Unity is only possible when you are tolerant and compassionate so it’s all interrelated.
You get an overwhelming message of peace and harmony through much of your music – why have you chosen this direction?
Two reasons: one is that it keeps me focused in my life and secondly it’s satisfying to see people getting inspired by positivity. My voice is a gift from the Creator and he has kept me really well. Why shouldn’t I use it to support his system, the base of which is goodness. I think that’s being grateful.
Your peace anthem ‘Only Love’ became part of the Olympic Games – How much did this recognition mean to you?
It actually started at the 3rd Global Peace and Unity event last year and the response was overwhelming. It then received a standing ovation at the LA Convention Center which gave me more confidence. Only Love is a heart to heart dialogue between the two worlds that I see getting distant and confused about each other. Both the worlds have a lot to learn from the goodness  they have established in their societies.
You’ve won a number of awards for your peace work – Do you think it’s important that singers use their platform to create music that touches on relevant social issues?
The thing is you need to communicate through all possible ways and people. Certain people follow politicians, some follow scholars and some follow artistes and celebrities. In a successful society people from different walks of life support each other in their own way eventually contributing to keep the society balanced.
You’re currently promoting your tenth album ‘Najam’ – have you found yourself having to change the direction of your music to accommodate changing trends in world music?
I have never been repetitive. I believe in progression and improvement For me it was worth every penny to record in England with the leading musicians of this industry. It was a perfect marriage of the two worlds. We shot videos in London, Mumbai, Krabi Island, Bangkok and we’re now planning to do something around Brighton and Eastbourne and New York. It’s an awesome experience and a truly global product.
You’re incredibly famous in your native Pakistan – how do you handle the pressures of being such a huge star?
By being humble and productive and keeping my child alive inside me (laughs). When I am about to get on stage I feel like dirt, absolutely nothing, which takes away the pressure and all on my mind at that time is that I need to get on stage and do my best which always works for me and I wouldn’t want it to change. I know that God has given me all of this for a reason and I should never forget that. So I enjoy my food and the very elementary things.
Najam a final word for your fans in the UK?
It was a pleasure talking to you. See you all at the concert.
Najam Sheraz will be performing at the Global Peace and Unity event at Excel Arena, London on October 25 & 26.