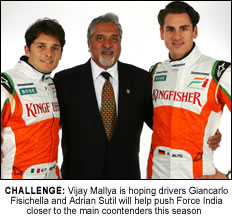 AS the Formula 1 season gathers pace for the start of the 2009 season in Australia later this month, one team hoping to lay their foundations for a successful term is the Force India team.
Led by India’s seventh richest man, Vijay Mallya, 2009 will be the team’s second year of competition at the highest level of motorsport following its creation in the final months of 2007. In its relatively short history the team has developed a strong following throughout the sub-continent and the Indian diaspora across the globe.
With its dynamic name, patriotic logo and colour scheme incorporating the colours of the Indian flag, the team is a sporting representation of the emerging generation of young, success-hungry, fast paced global Indians and the growing strength of India as a nation.
Building on the strong foundations and lessons of its debut year, the new-look team – led by Drivers Giancarlo Fisichella and Adrian Sutil – will be aiming to fulfil the dreams of this passionate following with a brace of results.
After a frustrating points-free debut season changes have to be made and its challenger car – the VJM02 – packs a powerful punch. Designed in-house at the team’s UK facility at Silverstone, the VJM02 boasts a Mercedes-Benz V8 engine and McLaren gearbox.
As the sport looks forward to the inaugural race of the 2009 season in Melbourne on 29 March, Vijay Mallya reveals his thoughts on the season ahead for Force India.
Force India is now entering its second year in the championship. How do you intend to build on the first season?
When we started as Force India at the beginning of the 2008 season we were quite pleased with the progress we made, we were midfield until we got to Europe. We showed some early gains and I was encouraged by the progress, but then in comparison to other teams I think it’s fair to say that we flattened out. I am not saying we didn’t improve, as I have often heard people say that Force India is perhaps the most improved team in the paddock, but clearly we did not improve enough. With this view in mind I did a lot of introspection and a reality check. I found that for many reasons that I had to make some changes to the structure of the team and to bring in some suppliers and partners I hoped would help us bridge that gap.
We still have much to learn as a team, but I hope that the experience we gained in 2008 sets us up properly for 2009. We have a lot to be excited about; a new drivetrain package and great new opportunities within the 2009 technical regulations.
What will your aims be as a team?
To be brutally honest, I would not be happy if we didn’t show some much improved, and much needed, performance. What we really set out to do over the winter was to put in place structures, procedures and partnerships that would give improvement, but crucially, no excuses. I would like to see a strong start, rising to points mid-season and a definite improvement in qualifying. Regular points finishes should be the aim. 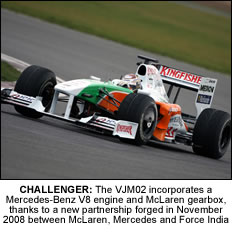 How do you see the new McLaren Mercedes partnership helping to reach this goal?
By using the same drivetrain as another team, Force India now has a high-level benchmark of its own performance. If performance relative to McLaren – the 2008 championship winning team – is low, there are only a reduced number of variables that need to be analysed and understood. Due to the late signing of the contract and the limited time available for designing and building the VJM02, immediate benchmarking is not be possible, but I would hope that by the midseason point Force India will have established itself well enough to accurately analyse its performance. The complete supply of a drivetrain has also allowed us to put our expertise in areas where it is needed. In doing this the team can progress at a quicker rate with the rest of the car.
Is this a way forward for the small, independent teams participating in F1?
We can’t say this is a blueprint for the way smaller, independent teams will conduct their affairs in future, but it is a very good way to safeguard the health of these teams right now. We did not have sufficient resources to compete with the larger and manufacturer teams on many levels, such as KERS. We have not done anything that contradicts the word or spirit of the regulations; we have just used them to try to get the most out of where we are right now.
I would like to think it is in everyone’s interest for Formula 1 to have competition and more teams, and if partnerships exist that allow smaller teams to use their own resources more effectively and compete on a higher level, then surely that should be embraced.
Do you think that the new regulations will benefit the team?
There are many advantages in such a major upheaval in technical regulations. A very mature set of rules always means that teams have had the time, and in some cases huge resources, to investigate every possible solution. As a smaller team we did not have that luxury. Now we are going back to basics and having to rethink the engineering of the car completely. Some people might get it right; others might need some work throughout the season. So in that respect we are on a much more even footing. 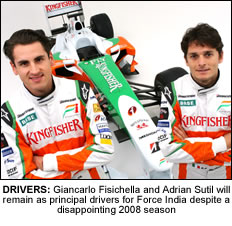 You are remaining with the same driver line-up as last year. What influenced this decision?
Giancarlo and Adrian worked well for us in 2008. We certainly benefited from having Giancarlo’s experience and Adrian is a hungry, upcoming driver who also knows the team well. It was the best driver combination available at the time.
Much has been made of our decision not to employ an Indian driver, but it was my feeling that, although there is great talent out there, it is not right for Force India at the current time. Of course at some point, from a patriotic point of view, I would love to see an Indian driver driving an Indian car and I have always said that with 1.2 billion people there must be a Lewis Hamilton in there somewhere! We will keep our eyes peeled and if, or when, the time is right, you’ll see it happen.
With the global economic crisis showing no signs of abating, are you concerned about the team’s finances or prospect?
Clearly one has to be concerned about what is happening in the world today. It’s unfortunate but true that we have to cut our costs and live in the real world and balance both income and expenditure. Force India is in a good enough position, it’s a smaller team with a much smaller budget than the big boys and so it is probably relatively easier for us to manage under these circumstances.
From a sponsor side, as my companies are sponsoring the team as well, we have an independent measurement of the exposure and the value of that exposure in relation to what we spend. I have to say that the results have been very encouraging, so even though we are not a front running team yet we have got value for money.
Have the new regulations and cost-cutting measures been a positive influence for the sport in your opinion?
Absolutely, I support the initiatives totally. For existing teams it is crucial to make budgets go further, but if the sport is to attract new teams and sponsors, it has to be feasible from a financial point of view, particularly in these hard times. Take it to any corporation in the world, and you have to make it work for you: you have to get a lot of bang for your buck as they say. If costs spiral out of control, it will make it nigh-on impossible for anyone to justify entering the championship.
This project, in many respects, has been a learning experience for the Indian population as well as the team itself. What has the reaction been back home?
I think the prospects are bright, challenging and exciting. India has a strong, young and upwardly mobile middle class. The Indian economy is expected to grow at 7% despite the global economic meltdown and the quest for entertainment is growing. Force India have partnered with MTV to produce a reality show called “Fast and Gorgeous” to identify four speed divas who will represent Force India during race weekends. This is expected to add great excitement amongst the youth and add further to the exponentially growing F1 television audience in India. There is also great media interest with national newspapers, whose circulation is amongst the highest in the world, regularly featuring the Force India Formula One Team.
For more information on Force India log onto www.forceindiaf1.com 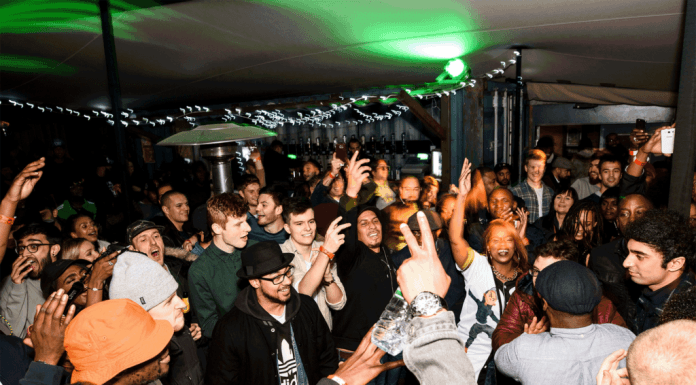 nonetheless their niche.This are checkmate was providing these solutions ergo rendering it reliable