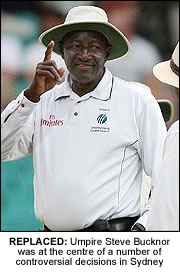 INDIA look to have won their dispute over umpire Steve Bucknor after the International Cricket Council revealed he will not be officiating for the third Test between India and Australia.
Bucknor, who was at the centre of a number of controversial decisions in the second Test in Sydney, has been replaced by Billy Bowden, ICC’s Malcolm Speed revealed.
India had complained against Bowden after they lost the second Test in Sydney in extraordinary circumstances.
“What we’ve seen over the last week is a lot of criticism of umpiring decisions, a lot of ill feeling,” Speed said.
“It’s not unlike the situation the cricket world faced at the Oval in July 2006. What we need to do is to alleviate some of the tension that is focused on this match and one way of doing that is to bring in a new umpiring team.”
The BCCI said they were satisfied with the decision undertaken by the ICC.
“We had expected this and as far as processes go this is a satisfactory decision,” BCCI’s chief administrative officer Ratnakar Shetty said.
“So much happened during the Test and hence we filed an appeal complaining against umpire Bucknor.”
Speed also revealed the ICC’s chief match referee Ranjan Madugalle will fly to Perth to act as a mediator between warring captains Anil Kumble and Ricky Ponting.
“His [Madugalle’s] only function in the Test will be to work with both of the captains, in effect as a mediator or a facilitator to make sure that the ill feeling that has evolved between the teams dissipates,” Speed said. “And that this Test and the following Test are played well and truly within the spirit of the game.”
Harbhajan Singh, the Indian bowler at the centre of the Sydney race row, may also be available for the third Test after Speed said his appeal against his three-match ban for using racist language against Australian all-rounder Andrew Symonds may not be heard before the Test begins on 16 January.
He said a senior judge would be appointed in the next 24 hours where up to ten players and officials will give evidence.
“Some of them are in Canberra, some of them have gone home. They’ll be gathering in Perth ahead of the Test some time next week. I simply don’t know whether it will be able to happen before that Test,” he added.

fees additional fees is likely to be involved if you’d like an extension on...