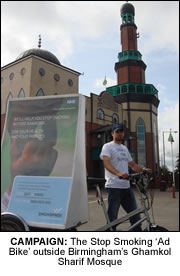 MUSLIMS preparing for the fasting month of Ramadan are being encouraged to quit smoking for good.
NHS stop smoking services in Birmingham have launched a seasonal campaign designed to get observant Muslims to quit in readiness for the fast. Most people know that many Muslims give up food and drink in daylight hours during Ramadan, but a lot of people don’t realise that smoking also forms part of the fast.
Now Muslim smokers who want to quit are being targeted by a new campaign, using a distinctive “ad bike”, a poster campaign and face-to-face discussions with smoking cessation advisors.
Dale Ricketts, the PCT’s smoking cessation manager, said:
“In previous years we’ve worked with people who wanted to quit in readiness for Ramadan, and we always hear that the extra support from our advisors makes it easier to give up before the fast.
“Lots of people find that if they can give up for daylight hours, they’re most of the way to quitting altogether, so it is a popular time for people to try to give up.
Birmingham’s stop smoking services see increases in demand around Ramadan and Eid, and also in January as more people try to kick the habit at these times of year.