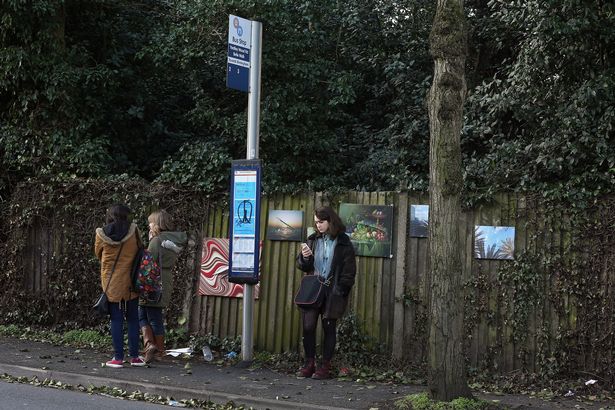 We’re all used to the dull daily commute, but travellers at one bus stop in Birmingham were in for a surprise when a mysterious artist brightened up their view.

An unidentified artist has turned the number two and three bus stop on Yardley Wood Road into an open air gallery by displaying art work for passers by.

Over the past few weeks, half a dozen canvasses showing abstract images and eye catching portraits have appeared nailed to a wooden fence near the Sparkhill stop.

The pictures appeared a few weeks ago but it’s unclear who left the pieces of work.

Despite being appreciated by most passers-by, some of the pieces have been vandalised and slashed through the centre.

Robert Geoghegan, a nearby artist says: “It’s good, it’s unusual. I’m all for putting pictures outside of art galleries. I sell my pictures from market stalls so I am very much for the man on the street looking at pictures of art.”

One commuter said: “It’s quite different; you don’t really see artwork on a daily basis. It was nice when I first saw it.”