Home Sports Zubair’s on the right track to F1 dream 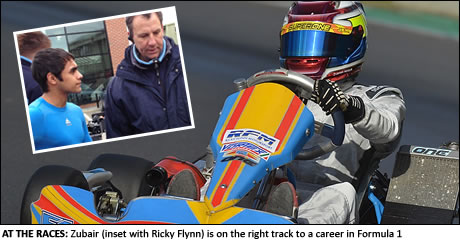 ONE of the country’s hottest Asian racing prospects is moving closer to his Formula 1 dream after signing with Europe’s top race team.
Zubair Hoque, 15, hopes to move up a gear after signing to the Ricky Flynn Motorsport (RFM) team.
The team has enjoyed unrivalled success in KF2 – a kart racing class for top drivers over the age of 15 – winning the British Super 1 title for the past four consecutive seasons.
The move has the full backing of Chris Norris, who for the past three years has helped to nurture Zubair’s prodigious talent at his Ormskirk based TMR team.
It means that Zubair has climbed up a stage in his long held ambition to eventually drive in Formula One.
In October last year he began training under RFM’s expert guidance, with a visit to the PFi circuit in Lincolnshire. It’s all part of the preparation which will see him travel with the RFM team to compete in the International Winter Cup at Garda, Italy which takes place this month.
Zubair entered into talks with Ricky Flynn after attending the WSK Euro Series at the Zuera circuit, located north of Zaragoza in Spain, in July last year.
Flynn already knew of Zubair’s growing reputation and had taken an interest in his 2009/2010 season lap records and finishing positions.
During 2010 Zubair competed in 13 races all over Europe and based on his performance in his rookie season, was invited to attend BMW’s Motorsport facility in Valencia for coaching by BMW Formula Motorsport Division’s top instructors.
By moving into KF2 – a kart racing class for top drivers over the age of 15 – he is following a well tried and tested career path which he hopes will lead to single seater racing in Formula Renault ,then GP3, GP2 and ultimately, Formula One.
“I spent time talking to Ricky Flynn about my racing ambitions and asked him if there was any space in his team over the next season,” Zubair says.
“I am thrilled that he has signed me up and offer my thanks to Chris Norris for the fantastic support and guidance he has given during my time at TMR. Chris has told me that he wants to see me go all the way and has fully encouraged the move to my new team.”
KF2 is one of the highest classes in kart racing and is run in both national and continental championships- the most prestigious being the European Championship and the World Cup. The 125cc karts feature Touch-and-Go (TaG) electronic ignition and water-cooled, two-stroke engines.
Amongst Zubair’s team mates at RFM will be Sam McCloud and Callan O’Keefe –two of the brightest young stars on the current circuit, who have been with Ricky Flynn for over two years.
“Racing in KF2 is physically tougher because the karts are much more powerful, able to reach a speed of up to 90mph, and they have incredible grip on the track due to a softer tyre compound, as well experiencing twice the amount of g-force under braking than what I’ve been used to, “ the 15-year-old said.
“But I’m already getting used to the new set-up, enjoying the challenge and look forward to competing in my first competition with RFM in February.”

If You Should Use Tinder Improve. Tinder promises to get around 50 million customers, with at least 12 million suits happen several times a...

I tried Hater, the notes Against humankind of dating applications